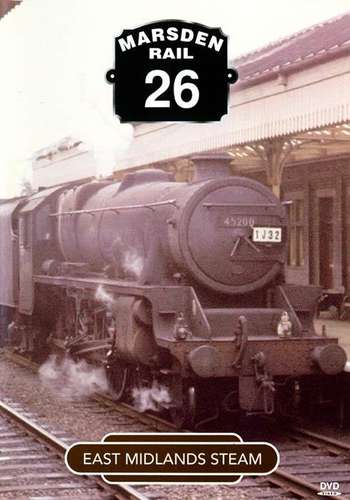 The tour followed the ex-MR line through Shackerstone and Gresley to Burton-on-Trent, from where it took the freight-only route to Trent Junction.

Leaving north from Trent Junction the tour headed for Kirby-in-Ashfield, Mansfield and Staveley, after which it journeyed down the Bolsover and Glapwell Colliery branch.

From here it ran via Chesterfield to the Erewash Valley en route to Pye Bridge and Ambergate, where filming of the tour came to an end due to failing light.

The programme also features many scenes at Derby and Nottingham, where trolleybuses were still an everyday sight.

The programme's focus is on the wide variety of steam classes that still operated as the 1960s unfolded.

From tank locos on the rail network that served the breweries of Burton-on-Trent, to BR-built '9F' 2-10-0s on coal trains through the Trent Valley.

Black 5s, 4Fs, 8Fs and Scots also feature in a programme, which is a reminder of the once immense rail traffic that characterised the East Midlands.