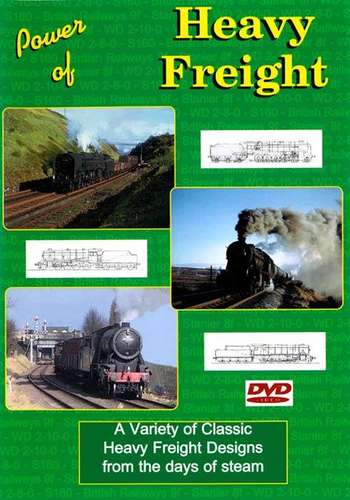 A variety of classic heavy freight designs from the days of steam, including:

The ever-increasing need for powerful designs capable of hauling heavy freight at speed and on steeply graded lines produced a number of designs from the 1930s, the War years and the British Railways era.

This programme uses archive film to provide a profile of some classic freight locomotives. It comprises:

The introduction of the Stanier 8Fs and the class in action in the days of working steam throughout the former LMS system, and the 8Fs in the preservation era.

The S160s from the United States of America.

The British Railways' 9Fs, their design and introduction with film of these 2-10-0s in action on the Great Central, in the North West, and on the routes into London, plus the 9Fs in the preservation era.

This programme provides an authoritative account and archive study of the days of the purpose-built heavy freight locomotive.