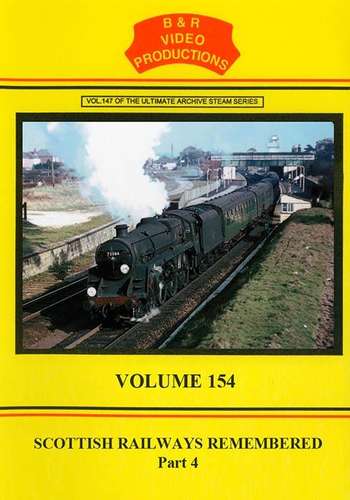 An archive film covering the railways in Central Scotland from Larbert to Glasgow Buchanan Street when A4 pacifics such as 60007 'Sir Nigel Gresley' ran on Glasgow to Aberdeen duties.

Other motive power is also shown on this route.

We then visit Bedlay Colliery with steam motive power before moving to the Fife area on lines from Dunfermline to Thornton Junction, Markinch, Alloa and Alva.

Two collieries at Kinneil and Dysart are seen in the Fife coalfields followed by a visit to the now closed Lochty Railway in the 1970s.

From Perth to Dundee in steam days with its variety of motive power in the mid-1960s.

At Dundee, although diesel hauled, the Royal Train is seen.

Finally over the Tay and Forth bridges to Edinburgh Waverley.

Among the steam motive power typicial of this area are 0-6-0 freight types through to WD, Black 5, B1, V2, A2, A4 and Standard 5s including Caprotti examples along with the preserved Scottish locomotives Nos. 246, 256 and 673 on railtours out on the main line and branch lines.

All film material used is in colour and an authentic soundtrack with an extensively researched commentary has been added.