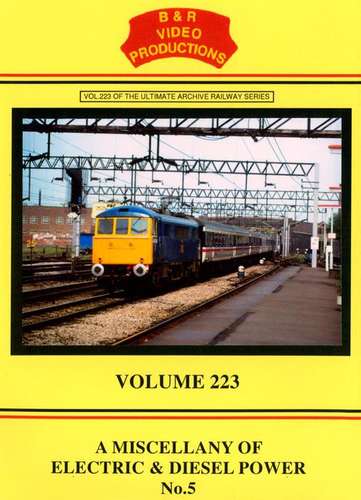 The fifth in our popular electric and diesel miscellany series covering classic ‘modern’ traction from the 1960s through to the 1980s. Much of this footage is over 50 years old and once again we travel far and wide with a multitude of locomotive types in a huge variety of very different locations.

We start with diesel hydraulic activities, including “Warships”, at Bristol, Plymouth and around Swansea. Then on to the Pembroke Dock branch for DMUs and Hymeks.

Travelling north we witness scenes at Scarborough (including a Royal Train working), York (for Deltics in action) and Class 56s near Selby.

Back south again and to the Weymouth line for Class 33s on push-pull operations through the Bincombe tunnels.

Returning north once more, we visit Crewe during the modernisation in 1985 and the Woodhead Route for Class 76s on freight and passenger workings.

Down in London, at Paddington station, we see even more hydraulics plus a variety of English Electric traction before visiting King’s Cross. Other locations seen briefly include the Settle & Carlisle line, the Shrewsbury area, Hanwell, Weston Rhyn and Loggerheads.

We also feature some unusual footage of an excursion with a Southern 2-BIL electric multiple unit at the very end of their working lives. A brief look at the “Class 44 Farewell” tour is followed by a section devoted to the Metropolitan electric locomotive tour of 1972 starring the two now preserved examples Nos. 5 & 12 hauling a rake of Guards Vans. We return to Crewe to see a “Royal Scot” tour departing with a Class 40.

The Brymbo branch and Bersham colliery are well covered with Peaks and Class 47s on coal trains. Plus we include a glimpse of a couple of industrial steam engines!

Returning north once again, vintage electric multiple units are seen on the Morecambe branch of the unique experimental line from Lancaster Green Ayre.

Finally, to bring back memories for some, we conclude with some footage of DMUs on now long lost and closed lines.

All the archive film is in colour and an informative commentary and authentic soundtrack have been added.