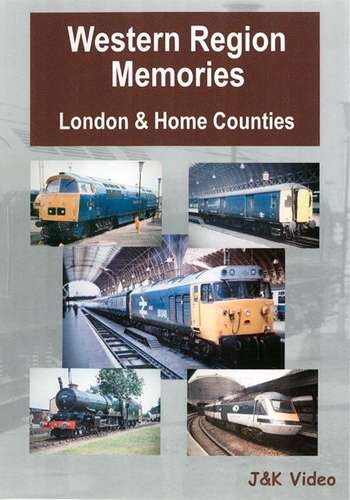 This production covers services from Paddington since 1975, when loco haulage was the norm.

There are scenes of the last days of operation of the 'Western' class diesel hydraulics and a proliferation of class 31s, 47s and 50s.

Suburban class 117 and 122 DMUs are also much in evidence, as well as class 128 and loco hauled parcel trains.

The change to HSTs on principal services is covered.

Services along the main lines as far as Newbury and Didcot are featured, as well as services to Birmingham via High Wycombe.

The Greenford, Windsor and Marlow branches are seen, as well as the Royalty and Railways Exhibition at Windsor.

The Paddington 125 celebrations included a steam run to Didcot behind 'King George V'.

There are two visits to the Southall Railway Centre when industrial steam was in operation and a run along the Brentford branch on the 'Brentford Coupler', comprising a pair of class 122 Bubble Cars.

The class 210 DEMU prototype is seen on a number of occasions.

Steam specials with 'King Edward I' are included as well as the 'Mince Pie' steam specials via the Greenford loop in December 1994, hauled by British Rail tank loco 80079 and class 2MT 46521.

Construction work in connection with the Heathrow Express is shown, together with scenes of trains using the temporary Heathrow Junction station, as well as first-day scenes at Paddington and the airport terminals.

Steam is seen at the Didcot Railway Centre during the Millennium celebrations and at the Old Oak Common open day of the same year, together with a variety of preserved diesels associated with the Western Region.

Bringing the story up to date, we see the various livery changes resulting from privatisation and the class 180 Adalentes.