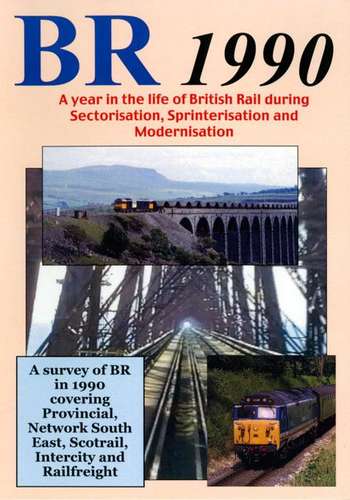 A reflection on Britsh Rail just five years before privatisation. Sprinterisation, Sectorisation and Modernisation were the buzz words of 1990. The DVD examines Network South East two years after its inception; Scotrail with Class 37s and 47s very much in charge; Intercity services; Railfreight and the many loco-hauled services at the time using Class 20s, 31s, 45s, 47s, 56s in Scotland and much more. Included are diesel events in East Anglia and many loco-hauled specials.

British Rail in 1990 from Railscene Newsviews and Rail Magazine.

Intercity:
Leeds to NL goes live; Newcastle changes; A 91 with a surrogate DVT; 91s on test with Mk 4s; Back to front 91 on commuter stock; 47/8; DBSO tests at Norwich and on service to Colchester; WCML; DVT at Taunton; Weymouth HST special; Charter to Tallylyn; Intercity's Crompton.

Railfreight:
Dead Cromptons leave Salisbury and are seen at Charnbrook and at their end at Vic Berry's; Dead 31s, 20s, 45 and 47 at Woodhouse; Green 20s at Wigan; 85/0 at Crewe; New Railfreight 90s; 47401; 56016 on borrowed time?; 56s in Scotland; 60s at Loughborough, Motherwell, S&C and Eastleigh training; Revenue work for 023 on Teeside and Mountsorrell; Weedkilling on Teeside; 59/1s on air cons on test; ARC 59 in service; New Speedlink at Bodmin; A Speedlink at Euston; The end of Furzebrook oil but new gas; Diesels take over from electrics on WCML coil trains.