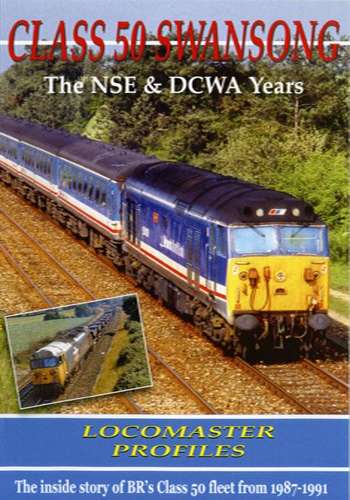 This DVD combines the two VHS programmes 'Fifties at Work' and '50s – The Final Years' into 100 minutes of Class 50 nostalgia, and covers the locos during their final years of regular service from 1987 to 1991. Not only has the footage been digitally re-mastered but the man responsible for the maintenance and upkeep of the locos, Geoff Hudson, has narrated this re-issue. As BR’s former Area Fleet Manager at Plymouth, Geoff tells the fascinating story of how it all happened. As many Class 50 followers will know, it wasn’t all plain sailing!

At the start of sectorisation in 1987 the Class 50s were working front line passenger services for Inter City, Provincial and Network South East. As their Inter City and Provincial passenger duties gradually disappeared, some of the locomotives were put to use on DCWA departmental work before being withdrawn. By 1991 their last booked passenger duties were the NSE turns out of Paddington and on the Waterloo-Exeter route. This DVD covers that entire period and includes...

Thames & Chiltern and Inter City services out of Paddington, Waterloo-Exeter workings including     Southampton diversions * summer Saturday loco-hauled services to Newquay, Class 50 workings over the Cotswold’s, Malvern’s and up the Lickey incline to Birmingham the last booked Class 50 over the Chilterns and the final day of booked ‘Fifty’ haulage from Paddington to Oxford, newspaper & parcels workings, DCWA Civil Engineers workings, 50 002 and 50 017 hauling the Bristol-Swindon Freightliner, experimental Railfreight loco 50 149 'Defiance' in action in Cornwall, the return of pioneer loco D400 on its first day back in traffic, Class 50s pounding the fearsome south Devon banks, 50 015 in Civil Engineers livery and 50 019 in Laira blue, 50 031 on its first working following a Large Logo repaint at Laira, railtours and specials including 50 008, 50 034 on ‘The Fellsman’, 50 026 & 50 032 on ‘The Malt & Hops’, 50 022 on ‘The Suffolkman’, 50 031 & 50 032 on the ‘Taw & Tour Tourer’ and 50 007 at the 1989 Windsor Rail Gala, 50 046 on a Bardon Aggregates working to Westbury and 50 028 hauling china clay CDAs on the Parkandillack branch, scenes of withdrawn Class 50s being put to the torch on the Old Oak Common turntable and last but not least, the programme features all 50 Class 50s!