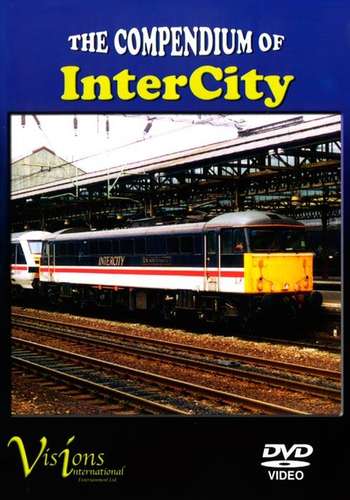 The fifth volume of our popular 'Compendium' series considers the operation that British Rail branded InterCity. The various changes to the operation from the 'blue' era in the early 1970s, through to 1996 when BR was privatised, are highlighted.

Programme highlights include:
Footage from the major main lines in the early 1970s; Deltics, 47s, Peaks  and 40s on the East Coast - 50s, 47s, AC electrics on the West Coast - Westerns, Warships, 47s, 50s and the ‘Blue Pullman’ on the Western; The prototype HST, the gas-turbine APT on show and the electric APT in action; The production HST sets on the Western, Eastern & Midland; The Sleeper, Motorail and Cross-Country services also feature; Class 37  and 47 at work on the Great Eastern, plus the Class 86s that superseded them; Deltics on the semi-fasts and 50s on the waterloo-Exeter services; 37s on the Cambrian Coast; the end of 45s and 85s on InterCity work; The introduction of the ‘raspberry ripple’ livery on 47s, 86s, 87s and  HSTs; Class 73s on ‘The Gatwick Express’; The Class 89 prototype on the  East Coast and Class 91s with HST DVTs; Swallow livery on 47s, 86s, 87s, 90s, HSTs and even a 37; Double-headed 37s on Scottish sleepers.

This programme will bring the memories of the shining jewel in former British Rail’s crown flooding back.