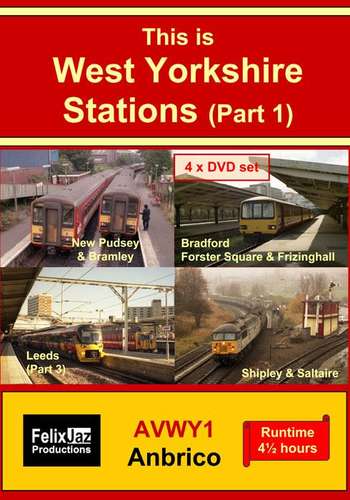 This is New Pudsey, Stanningley & Bramley (1975-2011) (AV919)
Filmed on location at New Pudsey station, Stanningley station and Bramley station from 1975 to 2011.
The first section features cine film taken in 1975 with sound added at a later date.
We travel on the final Kings Cross to Bradford service which calls at New Pudsey.

This is Bradford Forster Square (1988 - 2012) (AV935)
Forster Square was visited on 12 occasions between 1988 and 2012. First we see Class 142s and 144s on local services at the old Forster Square station. On Monday 3rd October 1988 the first regular London HST service departs Forster Square after previously using Interchange. Saturday 9th June 1990 was the final day of operation at the old station and we depart on a London service using single line working. That evening an engineers’ train arrives to cut the rail link to the old station. Monday 11th June 1990 the first London service departs from the newly connected Forster Square. Other services include classes: 142, 144 and 47s hauling 91s before electrification and then 308s and 333s afterwards. Frizinghall was visited on 3 occasions with classes: 142, 144, 308 and 333.