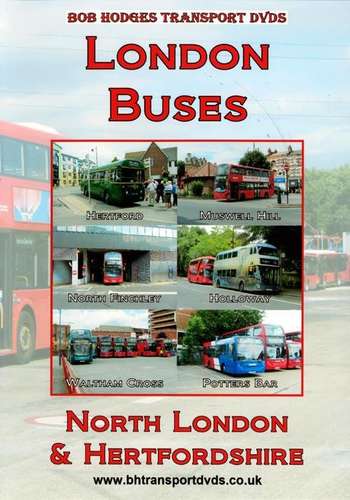 This DVD covers the area of North London from Kings Cross and Islington out to Waltham Cross and Barnet, former London Transport country bus operation in Hertford is also included. All of the four major bus groups that operate buses in London are represented in this area, Metroline owned by the Comfort DelGro Group of Singapore has garages in Holloway, Potters Bar and Kings Cross, the Holloway garage was originally a tram depot opened by the London County Council (LCC) in 1907-9, later operating trams and trolleybuses from 1938-52 and buses from 1961. The Potters Bar garage also has an interesting history and is unusual that it is outside the Transport for London (TfL) area but supplies buses for quite a few TfL routes as well as Hertfordshire commercial services. Arriva London, owned by Deutsche Bahn, operates from garages in Edmonton, Enfield (Ponders End), Palmers Green, Stamford Hill, Tottenham and Wood Green. Both Stamford Hill and Wood Green are former tram, later trolleybus depots, Edmonton being a typical modern depot on an industrial estate beside the River Lee, consisting of a large open parking area and a workshop building. Tottenham, Enfield and Palmers Green were all used by the London General Omnibus Company (LGOC) and passed to London Transport in 1933 when the London Passenger Transport Board was formed, later to the London Transport Executive (LTE) in 1948.

Go-Ahead London has one garage in North London in Northumberland Park near Tottenham. This is another modern garage with a large open air parking area plus a workshop building. Stagecoach doesn't have any garages in North London but its' buses can be seen in the area working on routes from East London. There are also several smaller operators such as Hackney Community Transport (CT Plus), and Sullivan Buses, on the fringes of the area EOS Bus Services, Regal Busways, Trustybus and Arrival Southern Counties operate routes from Essex and Hertfordshire. There is quite a variety of buses in use in North London, including New Routemasters on routes from Central London, there are large numbers of Alexander-Dennis Enviros plus older Alexander-Dennis Tridents and Dart SLF's. Wrightbus Gemini 2's and 3's can also be seen, many on Volvo chassis. Less frequently seen single deckers include Wright StreetLites and Optare Solos.

This DVD is divided into three chapters, each a journey around part of North London:

Subtitles, no commentary, enjoy the sights and sounds of buses in London.