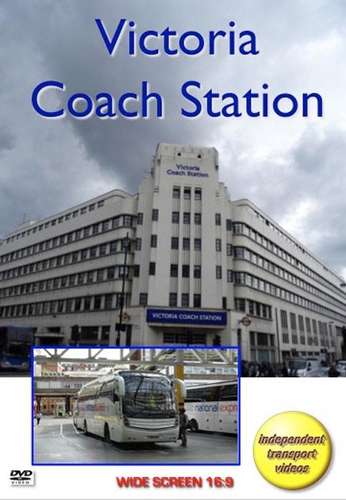 In 2017 London’s iconic Victoria Coach Station celebrated 85 years of continuous operation. Since the early 1970s, your cameraman from independent transport videos has paid a number of visits to record the coaches, and sometimes buses, that have operated to and from this noble structure. So on this DVD programme, we have collated a record of what happens on a daily basis in and around Victoria Coach Station for you to enjoy. We begin in March 2017 on the Sunday of the weekend when the 85-year birthday of the station was celebrated. We see a number of preserved coaches that would have operated to and from Victoria Coach Station in the past. The coaches and their colourful liveries are from the former fleets of Royal Blue, Southdown, Lincolnshire, East Kent, Wilts & Dorset and the Scottish Bus Group to name but a few and remind us of the colourful liveries they carried. AEC, Bristol, Leyland are just some of the types that will bring back the memories, as we see them parked in the coach station as the modern Caetano ‘Levante’, two and three-axle coaches on either Volvo or Scania chassis in their white livery pass by. We observe the ‘mass-departures’ from inside the coach station as the current National Express coaches leave for all points of the United Kingdom as well as the European fleets of Flixbus and Eurolines depart for mainland Europe. We also film the action along Elizabeth Street, where one of the exits from the coach station is situated.

Our cameras returned to the coach station in June 2019 to film most of the day’s activities in and around the coach station. Our locations being Buckingham Palace Road, Semley Place, Ebury Street and Elizabeth Street. There is much action to enjoy as we see the new Caetano ‘Levante 3’ coaches, which are now entering service with the operators for National Express alongside the massive Scania tri-axle double-deck coaches, also bodied by Caetano as their ‘Invictus’. Also making an impressive sight are the Plaxton Elite bodied Volvo B13R coaches operated by Park’s of Hamilton, at 15 metres long they look enormous! The 12.6m Volvo B9R version with similar bodywork also cuts an impressive dash! On leaving Victoria Coach Station in 2019 we now journey back into the past. From our extensive photographic archive, we have selected a number of images taken at the coach station in 1971, 1972, 1983 and 1984. In the 1971 photographs, there are no signs of white National Express coaches to be seen! All the traditional liveries are on show for all to see, together which a vast variety of vehicle types. Even during our visits in 1972 and the early 1980s, there is still a lot of ‘colour’ and variety of vehicle types on offer. We conclude with a brief video taken in September 1992 filmed in and around the coach station. Just see how much has or has not changed in the 48 years featured in this programme! Enjoy!