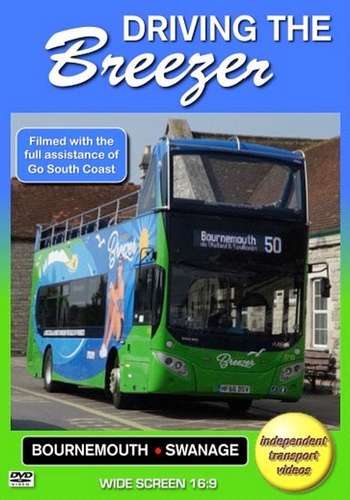 Voted as one of the most scenic bus journeys in the United Kingdom, Go South Coast’s route 50 that operates between Bournemouth and Swanage in Dorset has to be at the top of the list! Where else can you have spectacular views from the top deck of an open-top bus of the coast and countryside with a trip on a ferryboat thrown in for good measure? Go South Coast’s ‘morebus’ operate the service with a fleet of 12 part-permanent open-top, completely convertible open-top and closed top MCV Evoseti bodied Volvo B5TL double-deckers. These buses were delivered during 2016 and wear a striking green and blue livery. The closed top buses can be found in the summer months on the 40 service that travels over the Purbeck hills to Poole. This DVD programme takes you on the ‘50’ as both a driver and upper-deck passenger seeing for yourself how this route is up there with the best. We also look back to see what vehicles operated the service from Hants & Dorset in the 1960s, Wilts & Dorset in the 1980s that introduced double-deckers through to ‘morebus’ in the 2000s.

The filming of the route occurred over a four-week period in August 2020 and we are most grateful for the cooperation of Go South Coast that greatly aided making this programme possible. We begin our journey at the ‘morebus’ depot in Bournemouth where we join bus 1712 (HF66 DSY) along with our driver as he takes the bus to the start of the route at the bus station adjacent to Bournemouth railway station. The route takes us through Bournemouth Square, Westbourne and Canford Cliffs to the Sandbanks Ferry. Here we film the ferry and the bus travelling on the ferry to the Shell Bay side of the stretch of water that leads into Poole Harbour from the open sea. From here we travel through Studland Village to the end of the route at Swanage bus station that backs onto the excellent Swanage Railway. At Swanage we record the local bus action, seeing buses in ‘morebus’ livery and the blue livery of the Damory subsidiary, not to mention heritage liveried Scania/Optare 1412 (HF09 FVT) resplendent in Hants & Dorset Tilling green and cream!

The return journey to Bournemouth features roadside views of the buses making their way along this scenic route and over the ferry. The second part of our programme reviews some of the vehicles used over the years with the final scenes shot in September 2018 at the end of that summer season when the buses are seen having their roofs refitted by contractors at the depot yard in Swanage as they are prepared for winter work. Again we would like to thank Go South Coast for their help and assistance during the making of this programme and we hope that you enjoy watching it and if you haven't done so already, come along to Dorset and ride on the Breezer for yourself!