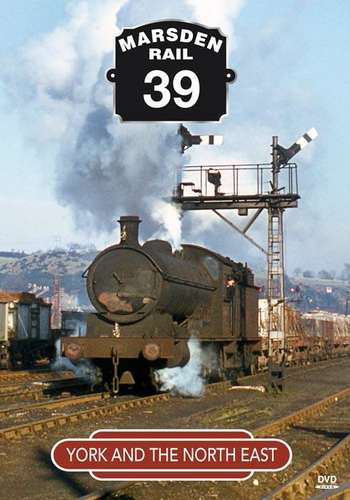 No.39 in the popular and best-selling Marsden Rail archive steam series looks at York and the North East. From a major railway city to an industrial hot-bed, this DVD rekindles the golden age of railways with a rich variety of steam traction, in traditional railway settings.

The programme starts at York, once the Headquarters of the North Eastern Railway, at a time when steam locomotives were still the backbone of passenger and freight operations. This is reflected in scenes at the busy station, the nearby motive power depot and several of the city’s yards which show a wide variety of engines at work, several of which dated from the time of the North Eastern Railway.

Moving north from York, the next location is Darlington where the station, MPD and Works yard are featured, as well as operations at some of the large industrial sites around the town and which used privately-owned locomotives. West of Darlington is Barnard Castle where a railtour is joined for the nine-mile journey to Middleton-in-Teesdale in April 1964.

Twenty-two miles north of Darlington on the East Coast Main Line is Durham where another railtour is joined for a journey to Bishop Auckland and the Wear Valley Branch, after which it continues to West Auckland, Port Clarence and Stockton. On the northern outskirts of Stockton is Billingham where operations at the station are featured. The programme then continues up the coast towards Sunderland, with views of the heavy coal traffic on both the main line and colliery branches.

In addition to coal mining, the most important industry in the area was steel production and one of the major plants was located at Consett. Iron ore was transported 25 miles inland from Tyne Dock to Consett by daily workings that were a major attraction for rail enthusiasts, particularly after the introduction of Class 9F heavy freight locomotives in the 1950s. These workings were among the heaviest on the BR network and form a major part of this programme.

Crossing the River Tyne, the next location is North Blyth and its busy yards. Also featured are miners’ trains at nearby Ashington Colliery and operations at the Derwenthaugh Coke Works, near Gateshead.

The King Edward Bridge West Junction and nearby Gateshead MPD are the next locations covered, from where it is a short distance to Newcastle Central Station where, in 1962, steam traction, and in particular ex-LNER ‘Pacifics,’ still reigned supreme.