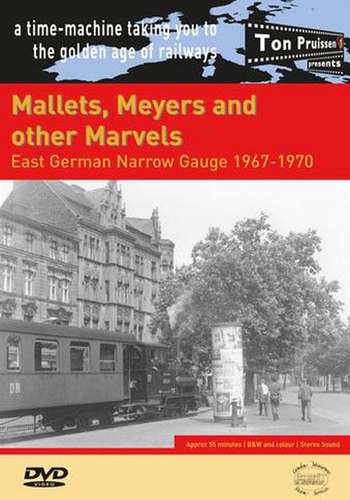 In this fascinating film Ton Pruissen looks at three little known East German systems, all of which closed during the communist era. All used unusual varities of locomotives, so this film differs from most others on East German narrow gauge. It covers, firstly, the 750 mm Prignitz system in NE Germany most of which closed in 1969, although a part survives as the “Pollo”preserved line. It also covers the metre gauge Spreewaldbahn in eastern Germany, largely closed in January 1970, and the metre gauge Franzburger Kreisbahnen on the Baltic coast, the last section of which closed in 1971.

Locomotive types seen in service on these systems include a 750 mm gauge Saxon type 0-4+4-0 Meyer compound, an 0-4-4-0 metre gauge Mallet and a 750 mm Wismar railcar. Most of the other motive power seen is 0-6-0 tank locomotives, largely elderly and of varied shapes and sizes, some of which where rebuilt in the 1960s.

Extras include printable and illustrated maps and notes on the systems and locomotives in PDF format. The film may be played with sound, but no commentary.