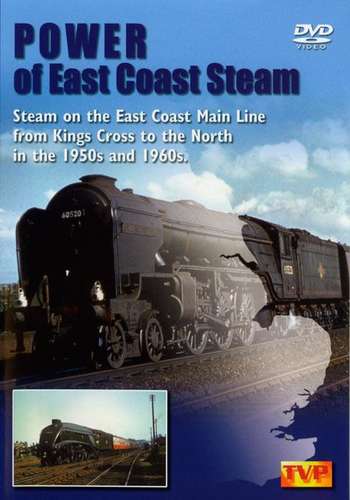 Steam on the East Coast Main Line from Kings Cross to the North in the 1950s and 1960s.

The post war years saw a rich variety of steam on the East Coast Main Line. Gresleys legendary A4s and other classic Pacific designs worked express passenger duties. BR Standards and various LNER designs worked freight. Suburban passenger traffic was hauled by L1s, N7s and N2s. This programme explores the era of working steam on the East Coast route in the 1950s and 1960s using the archive films of Bob Todd plus other cameramen of the period.

The East Coast Main Line in the 1950s with scenes on Welwyn Viaduct, Brookmans Park, Greenwood, Hatfield, New Southgate, Finsbury Park and New Barnet with everything from A4s to J50s and B17s on a wide variety of traffic.

1963 the last years of regular steam with 'Flying Scotsman' plus a wide variety of other workings. - Retford steam on freight in the summer of 1963. - York steam in and around the shed and station.

Steam on the East Coast Main Line from Kings Cross to the North in the 1950s and 1960s.