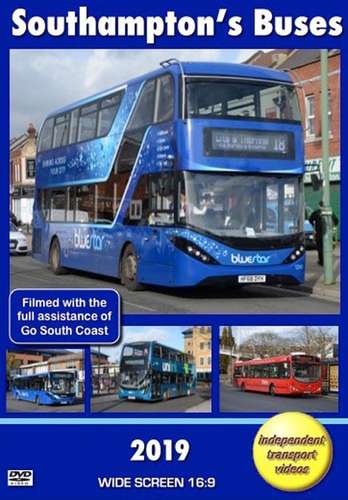 Since our previous DVD programme featuring Southampton’s buses - “Southampton’s Buses 1991 – 2015” you will see that many changes have occurred in the city affecting the contemporary bus scene. The main operators are still Go South Coast with their ‘Bluestar’ and ‘unibus’ operations and Firstbus with their ‘City Red’ branded buses for services within the Southampton area. It is proposed that Southampton will become a clean air zone, so the bus operators are preparing by updating their fleets with compliant vehicles. With this in mind Bluestar have adapted one of their ADL Enviro200 single deckers, 2740 (HF65 CXN) with equipment fixed to its roof to absorb pollutants to help clean the air in the city. This bus can be seen on this programme on two occasions, but with different units fitted!

We begin this programme, not in Southampton, but in Birmingham at the NEC that was hosting ‘Euro Bus Expo 2018’. Here we see the launch of one of Bluestar’s 20 Alexander Dennis Enviro400 City double deckers – 1235 (HF68 DXZ), which will operate route 18 in the city. This DVD programme was filmed throughout 2019, with our cameras making visits during February, May, September and November. Filming takes place at over fourteen locations including Castle Way, Bargate Street, Vincents Walk, High Street, Shirley High Street, Wyndham Place and even Winchester city centre to name but a few. There is plenty of action to enjoy as we see the smart buses running in service. Many more double deckers have been introduced to Southampton by Go South Coast. The previous ‘unibus’ fleet of ADL Enviro400 double-deckers have been replaced by a new fleet of ADL Enviro400MMC, both types with dual-door bodywork. The older buses have been cascaded to the main Bluestar fleet mostly for operation on the busy 17 route in the city. During our November visit you will see 1004 (YN56 FFK), one of a number of former Brighton & Hove Scania N94UD – East Lancs Omnideckers which seat 88 passengers, that have recently transferred to Bluestar. Firstbus now operate an entirely single-deck fleet in the city with most painted in a two-tone red livery laid out in the Firstbus corporate style. Vehicle types are Wright Streetlite 10.8m single deckers and Volvo B7RLEs with Wright Eclipse Urban bodies. During our May visit we were invited to film at the large Bluestar depot at Barton Park, Eastleigh. As the filming took place on a Saturday, many of the buses were out in service, but it was an opportunity to see the depot as well as a number of interesting vehicles that were not in service. One of these was one of the last VDL SB120 single-deckers with a Wright Cadet B39F body.

There is plenty to see on this programme including a glimpse of some the independents that operate in the Southampton area, namely Wheelers and Xelabus. We would like to thank Go South Coast for their help in the making of this programme and we hope you enjoy viewing it.