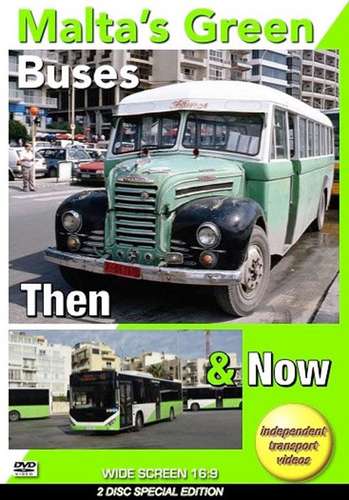 There has always been a fascination in Malta’s buses for many bus enthusiasts.  In recent years this has possibly waned as the fleet has been modernised and standardised.  However, after the period when the buses were operated by Arriva that finished at the beginning of 2014 the bus network was nationalised as ‘Malta Public Transport’.  In January 2015 Malta Public Transport was re-privatised and sold to Autobuses Urbanos de Leon (ALESA), a subsidiary of National Express – retaining the ‘Malta Public Transport’ fleet name.  At around that time a new livery of white and bright green was introduced, recalling memories of a bygone era.  The ‘spray-green’ livery as it was called was introduced to all route buses in the mid-1970s and was superseded by the final yellow, white and orange colours in the mid-1990s.

This brings us nicely to the subject of this special double disc DVD programme.  It features Malta’s green buses.  Part one goes back to the late 1970s when respected transport photographer Malcolm King made a number of trips to Malta to film on 8mm cine film the green buses of Malta that were operating at the time.  Many ‘normal-control’ buses are seen in service in the capital Valletta and at various locations throughout the island.  There are also shots of vehicles in the ‘Private Hire’ fleet in their white and cream livery.  We have also included some scenic shots that Malcolm took showing what the island looked like all those years ago!

We then feature the green Maltese buses in service in 1989, when photographer Joe Ward made a visit to the island.  Joe concentrates his scenes at the busy bus station in Valletta and along the coast at Sliema.

Part two of our Malta’s green buses programme was filmed by the independent transport videos cameras in October 2019.  We see the current fleet in operation all over the island.  Our locations include Valletta, Rabat/Mdina, Mosta, Mellieha and Cirkewwa that is the ferry port for the boats sailing to the neighbouring island of Gozo.  Our cameras sail across to Gozo where we catch up with the buses on this lovely island.  They carry the same livery and fleet names as the buses on Malta.  Our locations for action include Marsalforn, Victoria, Xlendi, Munxar and the ferry port at Mġarr, before joining the ferry for the journey back to Malta.  Back in Malta our cameras then film at Marsaskala, Marsaxlokk and Bugibba before a return visit to Rabat where we see former London Metroline Enviro400 double-deckers, recently converted to open-top - still in their London red livery, with one still carrying it’s London fleet number!  Final locations include Valletta bus station when daytime turns into night-time and finally scenes at night as the buses run along the promenade at Sliema.  The current Malta Public Transport fleet is made up of some former Arriva King Long 9 and 12-metre single-deckers, some Optare Solos which are now confined to taking the drivers to and from the depot and bus station in Valletta and the remains of a fleet of Mercedes-Benz Citaro 0530 (2–axle) buses exported from the UK in 2015. These buses formally operated at Heathrow Airport with three doors, new in 2007 – and are now used as driver trainers or as peak hour specials.  The mainstay of the fleet at the time of our visit were 243 Otokar 9.6 and 12-metre single-deckers.  The 142 9.6-metre buses are the ‘Otokar Vectio C’ model (BUS 601 - 743) delivered in July 2015.  There are two batches of 12-metre buses (BUS 801 – 861) and a further third batch delivered in July 2019 (BUS 862 – 901) these are the ‘Otokar Kent C’ model.  All types are seen on part two of this programme, which we hope you will enjoy!