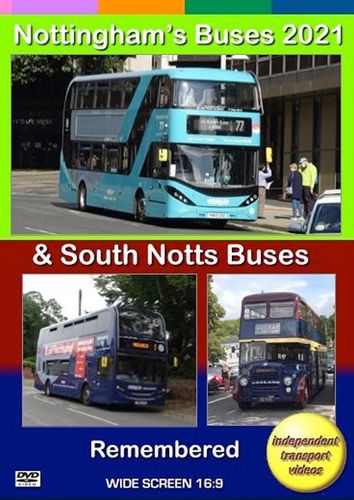 A good deal has happened since independent transport videos last DVD featuring the Buses of Nottingham was produced in 2015. The city of Nottingham and county town of Nottinghamshire operate one of the largest former municipal fleet of buses in the United Kingdom. Still controlled by the council this large modern fleet has a vast amount of interest to the transport enthusiast. Since our filming in 2015 a large fleet (120) of Scania N280 UD – Alexander-Dennis Enviro400 City Bio-Gas double-deckers have entered service. New single-deckers include a fleet of nine Alexander-Dennis Enviro 200MMCs, eight of which are for the Green Line route with one in the new generic livery of silver and teal. This new scheme has been introduced across the fleet for buses that can operate on any route, as the majority of buses are colour coded and route branded with this new style of livery application. Our filming took place over two visits in 2021. Locations include Upper and Lower Parliament Street, King Street, Queen Street, Beastmarket Hill, Market Street as well as Milton Street and Mansfield Road. A couple of sequences are filmed at the busy city centre roundabout junction with Derby Road, Maid Marion Way, Tollhouse Hill and Upper Parliament Street. At this location we also see the other main operator that serves Nottingham – Trent Barton, a member of the Wellglade Group. This colourful, smartly turned out operator has a single-deck fleet with each route branded in a different style. New ADL200MMC single-deckers as well as various Wrightbus vehicles are seen on this programme.

The second part of this DVD programme remembers the fleet of South Notts. Established in 1926 and sold to Nottingham City Transport in 1991 this fleet is still remembered by the company with their Service 1, which runs between Nottingham and Loughborough via the village of Gotham, which was the location of the South Notts depot until it’s closure in early 2021. Nottingham buses are in a stylised version of the South Notts dark blue and maroon livery.  We have the pleasure of some archive video taken by transport photographer Malcolm King. Filmed in the early 1990s just before the takeover by NCT we see the ‘hidden gems’ stored at the rear of the bus depot and the current working fleet at the time. This included Daimler Fleetlines with Northern Counties and ECW bodywork, some bought new and two from Southend Corporation, which replaced some of the Albion Lowlanders. Newest buses seen are Leyland Olympians with Northern Counties bodywork, two of which were bought in 1991 just prior to the takeover. Bringing the story up-to-date, we see Gotham in July 2021 with the modern NCT buses running Service 1 along Leake Road passing the former South Notts depot. Our programme ends with views and a ride onboard recently restored South Notts 82 (82 SVO), a 1963 (Leyland) Albion Lowlander LR3, which has a seventy-one seat Northern Counties body. The bus entered preservation back in 1983 but was sold to its present owners in 1999 and over the past ten years has been restored to its present immaculate condition by the North Kent Preservation Group. We see it in 2020 at the Tinkers Park Steam Rally and ride on it in Winchester at the King Alfred Heritage Bus Weekend in 2021.