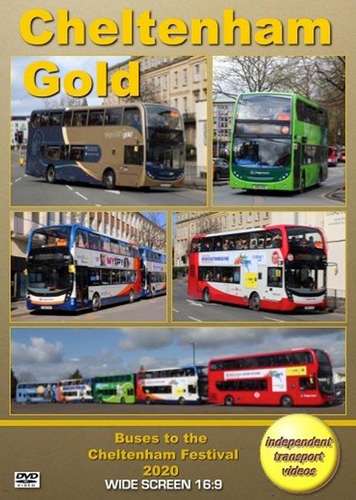 Every March up to a quarter of a million horse race-goers descend on Cheltenham to attend the ‘Cheltenham Festival’ with almost a week of horse racing culminating in the famous ‘Gold Cup’ race.  A large number of these race-goers arrive by train at Cheltenham Spa railway station and make the three-mile journey to the racecourse by bus.  The ‘Racecourse Shuttle Service’ is operated by Stagecoach West and is organised and planed to perfection by a dedicated team such that it runs like clockwork.  A total of 65 double-deckers are loaned from other Stagecoach fleets from around the country in addition to some local Stagecoach West vehicles that are used alongside them.  The buses range from older Transbus Trident ALX400 double-deckers to ADL and Scania Enviro400s and the very latest ADL and Scania Enviro400 MMC buses.  The additional buses were provided by the Stagecoach fleets of Cumbria & North Lancashire, East, East Midlands, London, Manchester, Midlands, North East, Oxford, South, South East, South West, Wales and Yorkshire.  Most vehicles are in Stagecoach corporate livery, but variations are seen; green buses from the Cambridge Busway and Stagecoach South’s ‘Southdowns’ livery, red buses from London, a two-tone red with white Scania/Enviro400MMC from the South West fleet as well as Stagecoach Gold branded buses.

In early March 2020 the independent transport videos cameras were on hand to record the event for you to enjoy.  Filmed over two days we follow the buses and the race-goers from arrival at Cheltenham Spa railway station to the racecourse via the town centre and back via the town centre to the railway station at the end of the last day.  Our programme is divided into eight sections, beginning at Cheltenham Spa where we see the buses loading from the trains to begin their journey.  We then film in the town centre, where we also catch up with the local service buses running their normal duties.  Most Stagecoach West double–deckers in Cheltenham are in the striking Stagecoach Gold livery and are seen alongside brand new Enviro200MMC single-deckers that have just received names nominated from an on-line vote organised by Stagecoach. Local independent operators are also filmed with Pulhams showing off their brand new ‘20-registration’ Optare Solo SR single-deckers and Marchants vehicles are also seen on this programme.  Town centre locations include St Georges Road, Royal Well Road, Promenade, Pittville Street and Portland Street to name but a few.  We then film the ‘Shuttle Service’ buses, as well as the local buses, on the spring-like Evesham Road heading to and from the racecourse.  On arrival at the racecourse we see, some amazing shots as the fleets of double-deckers disgorge their passengers.  Whilst the racing is on we take a look at the regular operations in the town centre before returning to the racecourse to see the mass departure of the buses at the end of the day’s racing, leaving the racecourse along New Barn Lane and Albert Road.  Our cameras also film the buses running through the town centre and along the normally pedestrianised section of the Promenade with special dispensation.  The final section on this programme is at Cheltenham Spa station where we see the buses arriving full of happy – and maybe not so happy punters heading off home by train.  We hope you enjoy your trip to the races albeit without horses!