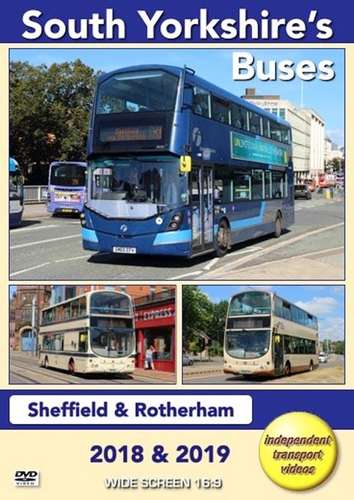 The independent transport videos cameras have returned to Yorkshire. This time to South Yorkshire which is centred on the city of Sheffield, once famous for its steel-making expertise. Our cameras visited Sheffield in 2018 and 2019, with a brief visit to Rotherham included in our 2019 filming. The main bus operators in the region are First South Yorkshire, which has depots in Doncaster and Sheffield and Stagecoach Yorkshire, having one of their Yorkshire depots situated at Ecclesfield, Sheffield. Independent bus operators seen include Hulleys of Baslow, TM Travel and Powells Bus of Rotherham. Sheffield is also home to the Stagecoach Supertram system, which we have covered in two previous programmes.

Our 2018 filming begins on West Street in Sheffield city centre. Other locations include the former Pond Street bus station which is now called Sheffield Interchange, Harmer Lane, Flat Street, Haymarket, High Street, Waingate, Castle Street and Arundel Gate to name but a few. Out of town, we film in Hillsborough, Middlewood and Gleadless. At the time of filming Firstbus were operating three Wright Eclipse Gemini double-deckers in heritage liveries (Sheffield Corporation Tramways, Sheffield Corporation and South Yorkshire PTE) and all are seen in this programme. Our cameras returned to Sheffield in 2019. Filming locations include Haymarket, Fitzalan Square, Sheaf Street, Arundel Gate and the streets around the Interchange, plus others in the city centre. A brief visit to Crystal Peaks at Westerthope is also included. A trip to Rotherham is also made where our cameras filmed on Frederick Street and Bridge Street adjacent to the Rotherham Interchange as well as Drummond Street. Plenty of action is recorded with both Firstbus and Stagecoach vehicles in attendance.

This DVD programme concludes with some excellent cine film and archive video footage from the camera of Malcolm King. Beginning in the 1970s we see a left-hand drive Leyland-DAB-Saurer articulated bus giving free rides in 1977, a London Transport DMS on loan in 1977 together with Dennis Dominator, MCW Metrobus and Leyland B15 (Titan) demonstrators in service in the city. Further scenes include the first ‘City Clipper’ MAN ‘Bendibus’ in service and much more! Featured in sound cine film from the 1980s are two all-over advert Metrobuses and preserved Roe bodied Leyland Titan PD3/1 904 (3904 WE) in action at Pond Street bus station. The 1990s archive video features the new ‘Mainline’ livery being shown off and brand new Volvo B10M-55/Alexander PS bodied single-deckers in service. Also seen is preserved AEC Regent V 874 (7874 WJ) with Alexander bodywork. It is interesting to see how much Sheffield has changed in these archive scenes – most of all now that trams have returned to the city. We hope you enjoy this round up of contemporary and archive bus scenes in South Yorkshire.