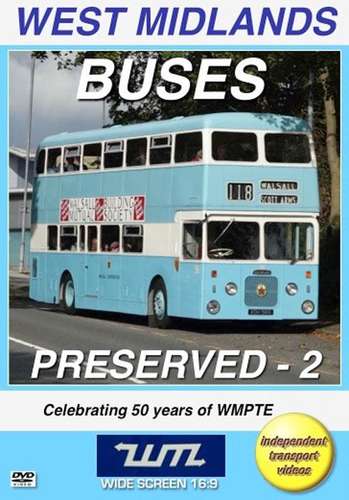 This is our second programme featuring preserved buses that served the large West Midlands conurbation. The excellent Transport Museum at Wythall, near Birmingham in the West Midlands is home to a large collection of buses and coaches. Throughout the year they put on some excellent events, usually with a theme using their own and other preserved buses invited to participate. This DVD programme filmed in October 2019, features one such event – the celebration of 50 years since the formation of ‘WMPTE’, the West Midlands Passenger Transport Executive. WMPTE brought together the Corporation bus fleets of Birmingham, Wolverhampton, Walsall and West Bromwich. Their individual liveries disappeared to one that featured a modified version of the Birmingham Corporation livery of blue and cream. It lasted from 1969 to 1986 when the bus industry in the UK was deregulated, and then became West Midlands Travel. Coventry Corporation had joined the combined fleet on 1st April 1974 as a result of local-government reorganisation. To the present day, the PTE and Passenger Transport Authority (PTA) continue to control the operation of transport in the West Midlands, but the majority of the buses are operated by National Express West Midlands (NXWM).

Our filming begins at the Transport Museum where we ride on 719 (NJW 719E) a 1967 Daimler Roadliner formerly operated by Wolverhampton Corporation and travel to Alcester Road South, Maypole where we witness all of the action on this special running day with around 40 buses operating a special route from the museum to the Maypole and then a shuttle between Maypole and Becketts Island on Alcester Road. This event referred to by the museum as WMPTE 50 “HAPPY HOUR” – actually ran for 3 hours! Here we see Daimler Fleetlines, Guy Arabs, MCW Metrobuses, a Volvo Ailsa, Bristol VRT, the Daimler Roadliner and the unique Daimler CRC6-36 double-decker in Walsall Corporation livery. Liveries featured are Wolverhampton, Walsall, Birmingham, West Bromwich and Coventry Corporations and of course WMPTE. The current operator, National Express West Midlands have also painted a number of their contemporary buses into these heritage liveries. We see Transbus Trident 4535 (Wolverhampton), Volvo B7TL 4651 (Birmingham), Volvo B7TL 4679 (West Bromwich), Transbus Trident 4601 (Walsall) and Scania Omnicity 4780 (WMPTE). Our cameras ride on MCW ‘Tracline’ Metrobus 8110 (A110 WVP) and Metrobus 6835 (WDA 835T), which was one of five experimental Metrobuses dating from 1978. A further ride is on 4001 (R1 NEG) the first low-floor DAF Optare Spectra operated by TWM as we return on the Park & Ride service. We film a further visit to Wythall when we take a ride on West Bromwich 101 (NEA 101F), their first Daimler Fleetline and see a number of non-West Midlands vehicles on display.

To complete our programme we delve into the archives to see some video shot by George Butler on the final day of Daimler Fleetline operation in Birmingham on 1st November 1997. We see the contemporary scene at the time in the city with Fleetlines operating the 27 route in the company of a number of Metrobus MkII buses painted in the heritage liveries of the former corporation fleets! History is repeating itself!