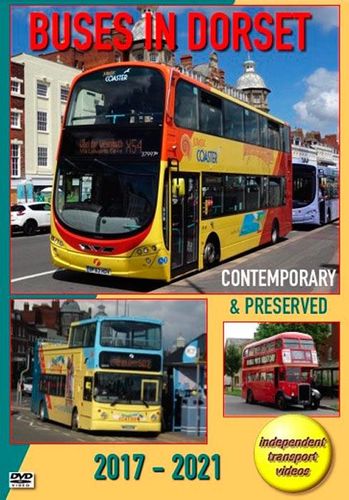 The county of Dorset on England’s south coast is blessed with superb scenery both inland and coastal. The independent transport videos cameras have been out recording both the contemporary and preserved bus and coach scene for you to enjoy. Filmed over a period from 2017 to 2021 we have recorded the contemporary buses mostly along the coast in the western part of the county in Weymouth, Bridport and Lyme Regis.

The ‘preserved’ filming covers two events that took place in 2021, namely the ‘Buses to the Bill’ event and the ‘Dorchester Running Day’. Starting with the contemporary scene we begin filming in Weymouth in 2017 and 2020 where the main bus operator is First Wessex with other buses running in from Dorset’s other main bus operator Go South Coast with their ‘Damory’ and ‘more’ branded buses. The locations filmed in Weymouth are The Esplanade, Commercial Road and New Road on Portland. Here you will see a number of the Firstbus liveries as they change from the more formal corporate scheme to brighter, more colourful liveries with a local identity. You will also see some vehicles transferred in from First Solent at Southampton adding a further splash of colour. Some of the buses filmed have now left the fleet and have passed into history!

The 2021 contemporary scene is filmed in Weymouth, Abbotsbury Hill – a most scenic road between Weymouth and Bridport, Bridport town and bus station and in the pretty seaside town of Lyme Regis. First Wessex is the main operator with their ‘Jurassic Coaster’ liveried buses in closed top and open-top form and the latest First Wessex livery of two tone green and yellow adding colour to the bus scene.

The second part of our programme looks at two ‘preserved’ bus events. The first is ‘Buses to the Bill’, where a selection of preserved buses and coaches ran from Salisbury to Portland Bill via Blandford, Dorchester and Weymouth. Our cameras filmed the buses at Blandford, Lodmoor Coach Park in Weymouth and at Portland Bill. Some of the fleets represented were Bournemouth Corporation, Damory, Hants & Dorset, Wilts & Dorset, Southern National, Burrows Coaches, Red & White and more! The second ‘preserved’ event is the ‘Dorchester Running Day’. Centred at the Top o’ Town coach and car park in the town our cameras capture the buses running through Dorchester and take rides on former London Transport Leyland Titan RTL1163 (LYF 104), former Silver Star of Porton Down Leyland Atlantean, 42 (1013 MW) and former Yellow Buses – Bournemouth Volvo Citybus, 208 (E208 GCG). We travel to nearby Poundbury and back to the rally site. Again a good selection of bus companies represented. We hope you enjoy this visit to Dorset and see the great variety of buses and coaches this lovely county has to offer.