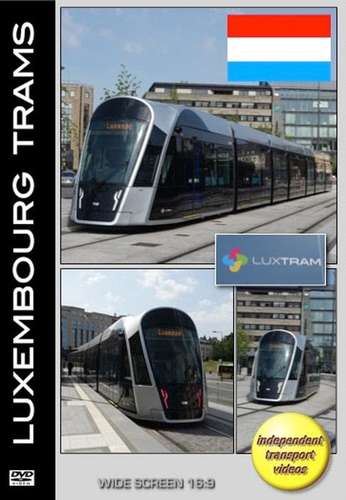 The city of Luxembourg is the capital of the Grand Duchy of Luxembourg, a small country that is surrounded by Belgium, France and Germany. French is the official language along with German and the country is home to a number of European institutions. The first-generation electric tramway operated from 1908 until 1964 on metre-gauge track covering some 24km. In 2014 a tramway project was approved to build a new line from the south-west of the city centre to the Kirchberg area with an option to extend to the airport, which is nearby.

Opened in December 2017 the line currently terminates in the north-east at Luxexpo, where the depot is situated. This was the section that was built first and at the time of our filming in July 2019 the line continued south to Stäreplaz/Place de l’Etolle near the city centre. The section from Rout Bréck-Pafendall over the Grand Duchess Charlotte Bridge to Stäreplaz/Place de l’Etolle runs catenary-free, the trams having supercapacitor accumulator technology for ground-level rapid charging at stations along the line. The fleet is made up of 21 CAF Urbos 3 trams of which a further 12 have been ordered for when the system is complete by the end of 2021. They are finished in a striking black and silver livery with different coloured glass in the doors, which give the trams a colourful interior when the sun shines in. The fleet name is ‘Luxtram’. The independent transport videos cameras have filmed the entire route for you to enjoy. We begin at Alphonse Weicker and travel to Luxexpo where the trams run into the depot to change tracks. Our cameras then travel the route getting off at various stations to film the trams in operation. One such stop is at Rout Bréck-Pafendall where the trams connect with a brand new funicular railway. Known as the CFL Pfaffenthal – Kirchberg Funicular Railway, our cameras capture the cars operating this service. We then see the trams operating over the Grand Duchess Charlotte Bridge and running into the Theater stop, which was still under construction.

From the current terminus at Stäreplaz/Place de l’Etolle we make our way back to Alphonse Weicker travelling on trams 106, 102 and 110 to see the driver’s eye view of the route and stopping off at various stations to change trams. To conclude our visit to Luxembourg we visit the tram museum. Here we see the superbly built 1:8 scale models of tramcars from the first-generation system starting with number 1 from 1908 in the exhibition room. In the main depot we then see in some detail the actual preserved cars, number 34 from 1931, motorcar 26 from 1938 and trailer car 121 from 1937. Also, trailer car 112 which began life as motorcar number 12. A visit to Luxembourg is a must for the tram enthusiast to see this superb modern system developing and enjoy the sights of this lovely European city.