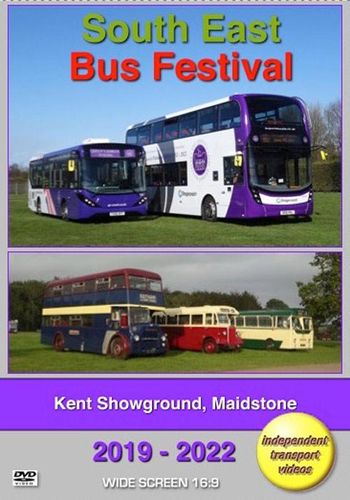 One of the highlights at the start of the year in the Bus Rally calendar is the South East Bus Festival, which takes place annually on the Kent Showground at Detling near Maidstone. The event began in 2011 and the independent transport videos cameras are no strangers to it. This programme looks at the highlights of the buses and coaches attending the event over the years from 2019 to 2022. There is always a good display of buses and coaches to be inspected by the public in the main display area, with a selection of buses giving rides around the site with stops at the many attractions which include classic cars, commercial vehicles, model steam engines and a lot more.

This DVD programme begins in 2019 with just a brief visit, as the weather was rather inclement for filming! We then jump to the 2021 footage as the 2020 event did not take place due to the ongoing worldwide coronavirus pandemic. In 2021 the event took place in October and our cameras filmed both the buses and coaches on display and those giving rides from various locations around the showground as well as the vehicles leaving the event at the end of the day. Many fleets are represented, not just from the south east of England but also from many parts of the UK. The 2022 event returned to its usual April timing. A beautiful spring day showed all the buses and coaches off to their best in brilliant sunshine. One of the highlights of the day was a parade of buses to mark the Queen’s Platinum Jubilee. A selection of buses from the decades of the Queen’s reign paraded around the Showground, which was lead by a Stagecoach ADL Enviro400MMC double-decker in a special ‘Jubilee’ livery. It was followed by buses and coaches from the 1950s, 1960s, 1970s, 1980s, 1990s, 2000s, 2010s and 2020s bringing us up-to-date with electric buses in the shape of a Volvo BZL single-deck demonstrator and a new Abellio London BYD Enviro 400EV MMC City “TfL Future Bus Project” double-decker. As you can expect there are many vehicle types for you to enjoy including AEC, Bristol, Daimler, Leyland and many more. Modern vehicles include buses manufactured by Alexander Dennis, Scania, Wrightbus and Volvo to name but a few.

So there is a lot for you to enjoy on this DVD programme as we celebrate the “South East Bus Festival as it brings together buses and coaches, old and new, from across the South East and beyond”.