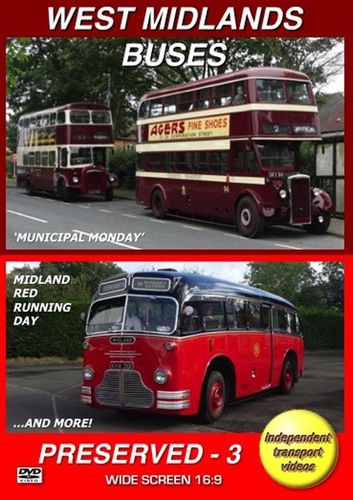 We would like to welcome you to this our third programme featuring preserved buses that served the large West Midlands conurbation. The excellent Transport Museum at Wythall, near Birmingham in the West Midlands is home to a large collection of buses and coaches. Throughout the year they put on some excellent events, usually with a theme using their own and other preserved buses invited to participate.

This DVD programme filmed during 2021 features three such events. The first one being their ‘Spring Bank Holiday’ event. This event features some buses and coaches from other parts of the county such as a Royal Blue coach and a former Southdown Leyland Titan TD3 – 970 (AUF 670) on which our cameras take a ride to Old Alcester Road at Maypole, Birmingham. Much of the day’s action featuring preserved buses running in service is filmed here. Other rides are taken on former Birmingham Corporation 2548 (JOJ 548), a 1950 Guy Arab IV on a round trip to Maypole from the Museum.

The second event featured on this programme is the ‘West Midlands Municipal Monday’ event. This event showcased former municipal buses and majored on buses from the Coventry Corporation fleet, amongst others. We take a ride on former Coventry Corporation 334 (334 CRW), a 1962 Daimler CVG6 double-decker to the current National Express West Midlands (NXWM) Yardley Wood bus garage. We travel in the presence of other preserved former Coventry buses for a photo shoot at the entrance to the bus garage and return to the Museum on 334. Our cameras then board former Coventry 94 (GKV 94), a Daimler CVA6 from 1950 for a ride to Maypole and return on a former Trent Leyland Titan PD2 dating from 1955 to the Museum. Look out for NXWM 4601 (BX54 DDJ), an Alexander ALX400 painted by NXWM in the former Walsall Corporation livery. Unfortunately since our filming this bus has been destroyed by fire.

The third event is really quite something - the ‘Midland Red Running Day’. We travel on no fewer than seven former Midland Red buses and coaches! We begin our day at the Museum and take a ride on a BMMO S22 single-decker bus, 5901 (MHA901F) to Maypole and then join a BMMO C5 ‘Motorway Coach’, 4780 (780 GHA), which has been restored to a very high standard, travelling to Becketts Island on Alcester Road in Wythall. Here we witness a breakdown of 5901 and see it’s recovery by a preserved former Leyland Titan double-decker, that was converted to a breakdown tender, 2225 (SBF 233). Other types of vehicles ridden on include a Daimler Fleetline, Leyland Titan PD2, Leyland National and a Leyland Olympian. A non-Midland Red bus ride is on Trent Leyland PD2 1256 (FRC 956). There is plenty of roadside filming for you to enjoy as the area is transformed back to the Midland Red era.

We conclude this programme with a look at Britain’s first low-floor double-decker, 4001 (R1 NEC), new to Travel West Midlands. This DAF DB250LF with Optare Spectra H72F bodywork was built in 1997 and is seen operating the park & ride service to and from the Museum.