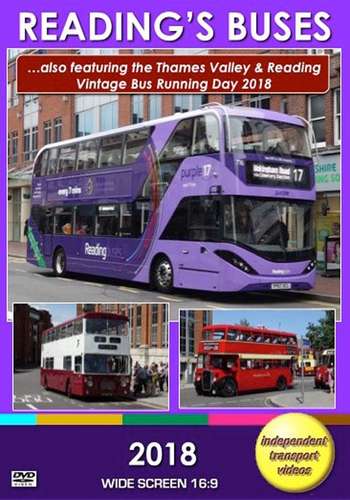 Anyone that has visited Reading in recent years will have noticed the vast array of colours adorning the town’s local buses, branded as Readingbuses. All routes are colour coded, with the buses painted in the colours to match the route they operate on. The current fleet is very modern, featuring many advanced vehicles. The newest double-deckers are ADL Enviro 400City double-deckers that run on bio-fuel and are in a striking purple livery for the 17 service to Tilehurst, that at one time was a trolleybus route. The year 2018 marks 50 years since the end of the trolleybuses in Reading and this tied in nicely with the annual Thames Valley & Reading Vintage Bus Running Day event organised by the Thames Valley & Great Western Omnibus Trust. The running day was centred on Station Hill, adjacent to the Reading mainline railway station on Sunday 3rd June 2018. The independent transport videos cameras were on hand to record the day for you. A small static display featured a 1927 Tilling-Stevens Thames Valley single-decker along with a 1927 Great Western Railway Guy FBB single-decker. To represent the trolleybuses, 181 (ERD 152) a Park Royal bodied Sunbeam S7 had come from the Sandtoft Trolleybus Museum and was parked for the public to inspect. As well as the Thames Valley and Reading vehicles there were buses and coaches representing Wilts & Dorset, Aldershot & District, Devon General, London Transport, Royal Blue, Red & White to name but a few!

Our cameras take you on three bus rides in this programme! The first on Reading Corporation Dennis Loline, 76 (GRD 576D), dating from 1966 on the former trolleybus route 17 to Tilehurst and back to Station Hill. The second on Reading Transport Bristol VRT/LL6G, 38 (NDP 38R), dating from 1976 also on route 17 to Tilehurst. The third ride is onboard Thames Valley Bristol Lodekka FLF6G, D40 (GRX 140D) a 1966 bus on service 1 to Thatcham. Filming locations in Reading include the town centre, where we see some of the contemporary vehicles for comparison and Station Hill. The second part of our programme concentrates on the contemporary scene. Filmed in May 2018 our cameras visit the town to update our footage from the 2015 visit. Locations include Blagrave Street, Forbury Road, Friar Street, St Mary’s Butts and West Street. Here we see most of the modern fleet in action including some of the new Wrightbus Streetdeck double-deckers on the Orange route to Woodley. Also of interest is the recent arrival of former Blackpool Transport Dennis Tridents with East Lancs Myllennium bodywork. They were new to Bus Vannin on the Isle of Man and are painted in all-over blue livery and are intended for football services, but we see them in action on the 21 service and a Vamooz duty! In late 2017 Reading Buses started operating a number of services that First Berkshire had previously run in the Slough area along with Green Line routes 702 and 703. The Slough services are branded Thames Valley and have a stylised red livery bringing alive the old respected fleet name. Our cameras now move along to Slough to see both Reading and First buses in action in the town and at the bus station. Star of the show is Readingbuses 757 (YX64 VRT) an ADL 400MMC double–decker in a special livery to mark the Royal Wedding of Prince Harry to Meghan Markle in May 2018. Our filming concludes in Windsor as we see 757 and 1208 (GO11 LDN) in the Readingbuses version of the Green Line livery. We hope you enjoy this update of the contemporary scene and nostalgic look back at buses in Reading.