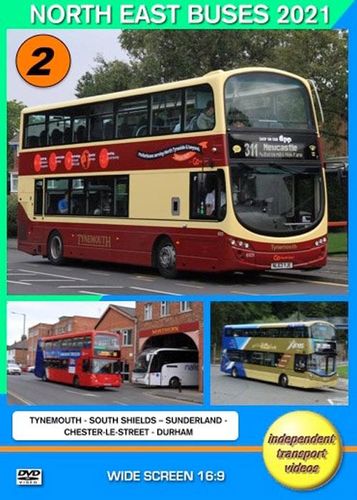 England’s North East region is an absolute gem of an area for the modern day bus enthusiast.  The independent transport videos cameras made a visit to the area during 2021 to record the action for you to enjoy.  With so much to film we have had to separate the video footage into three programmes!  This, the second in the trilogy, covers an area from Tynemouth on the North East coast along through Wallsend, North Shields, and Whitley Bay.  We continue south to South Shields, Sunderland, Chester-Le-Street and Durham.  The main operators in this area are similar to those seen in Part One of this programme trilogy.  They are Go Ahead with their Go North East fleet (GNE), Arriva North East and Stagecoach with their Stagecoach North East operations.  Other operators seen briefly are Nexus (Transport for Tyne & Wear) and J H Coaches of Chester-Le-Street.
We begin this programme in Tynemouth and see, amongst others, GNE Volvo B9TL with a Wrightbus Gemini 2 body, 6101 (NL63 YJE), smartly painted in the former Tynemouth and District company’s maroon and cream livery. As in our first programme there are a vast number of different liveries to be seen.  Most colourful are on the Go North East (GNE) buses with most buses in route branded liveries.  The most striking are the ‘X Lines’ services, a network of routes offering limited stop and express services linking the cities, towns and small communities in the north east.  GNE also have a generic livery of red and blue separated with white and yellow flashes towards the rear of the vehicles. Arriva are sporting their latest livery together with buses still in the older scheme as well as a number in both ‘Sapphire’ and ‘Max’ brands.  Stagecoach is another operator introducing new livery schemes and these are seen on this programme in abundance.  From the coastal area, north of the River Tyne we concentrate our filming south of the river in South Shields where we see the buses arriving and departing at the town’s new interchange bus station that links it with the Tyne & Wear Metro.  All three main operators are seen at the interchange.  Stagecoach have a large number of their gas powered Scania K270 UB Gas buses allocated to the North East.  They have ADL Enviro300 bodywork and a number of them are starting to appear in the new livery.  These buses are also seen at our next filming location, Sunderland where we film at the busy bus station and in the surrounding streets and the road leading to the impressive road bridge that spans the River Wear.

Chester-Le-Street is our next stop were we see GNE buses in action.  Most impressive are the Wrightbus StreetDeck double-deckers in their two-tone green ‘Angel’ livery for the 21 route to Newcastle.  We also film the buses leaving and passing the bus garage in the town that displays the old ‘Northern’ fleet name over the doors.  Our final location is the university town of Durham, famous for its beautiful cathedral situated adjacent to the River Wear.  Here Arriva is the major operator with GNE buses seen passing through.  Look out for a couple of Plaxton President double-deckers owned by the independent J H Coaches in a gold livery operating on hire to Go North East.  Filming takes place at the busy roundabout in the shadow of the marvellous railway viaduct that carries the main railway line from London to the North and Scotland and in North Road that the buses are using due to the absence of the bus station. We hope you enjoy this second part of our visit to England’s North East featuring the many buses.