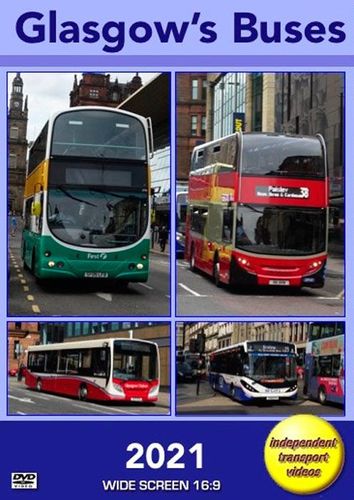 The independent transport videos cameras returned to Glasgow during August 2021 to record the bus scene updating our previous 2019 visit. The main operator in the city is First Glasgow, part of the Firstbus group that has five bus garages in and around the city. Other bus operators that serve Glasgow seen in this DVD programme are Stagecoach West Scotland that run some local and inter-urban stage carriage routes as well as longer distance express coach routes using double-deck, three-axle coaches branded for these routes, although the new Stagecoach long distance livery of deep yellow and gold is slowly replacing these route-branded liveries. Their Megabus operation also run on some routes, most notable being the ‘6 Cities’ service that links Scotland’s cities.

McGill’s are also a major player in the city with their smart blue and white buses branded for their network of routes serving places to the west of Glasgow. Look out for their Enviro400 double-decker, J8960 (66 XKW) in a retro livery of the original McGill’s company but celebrating the current company’s 20th year of operations in Inverclyde. This bus has had an interesting life. Originally an ADL400 demonstrator (SN59 AWX), it then operated for Connex in Jersey as 1183 (J 35501) before being bought by McGill’s in July 2021. You can see buses running for the original McGill's company at the end of this programme with some cine archive film from the camera of Malcolm King.

Other operators seen are West Coast Motors, with some buses branded as Glasgow Citybus, Park’s of Hamilton, Stuarts and Caledonian Travel. Our filming begins at the entry/exit point of the very busy Buchanan Bus Station in Killermont Street, Glasgow. Our cameras are on hand to film the comings and goings during a busy morning and afternoon as we also film along Renfield Street, Renfrew Street and North Hanover Street calling back to see the further movements at the bus station. Further locations take us on a trip around mostly western Glasgow. These locations include Cathedral Street, Hope Street, Sauchiehall Street, St Georges Road, Maryhill Road, Great Western Road, Byres Road, Dumbarton Road, Argyle Street, St Vincent Street, Union Street, Glassford Street and Ingram Street concluding at George Square. You will certainly get a good impression of the bus operations in this busy Scottish city. Look out for the First Glasgow Wright bodied double-deckers in heritage Glasgow liveries! We conclude our 2021 filming with a brief visit to Stirling. Here we film the bus activity along Goosecroft Road adjacent to the bus station and on Forth Street. The bus operator here is First Scotland East.

As mentioned above, we conclude this DVD programme with some cine film taken by Malcolm King in the 1970s where we see buses from the original McGill’s company as well as a Western SMT Daimler Fleetline and some buses from A.A. Motor Services Ltd. Enjoy the nostalgia!