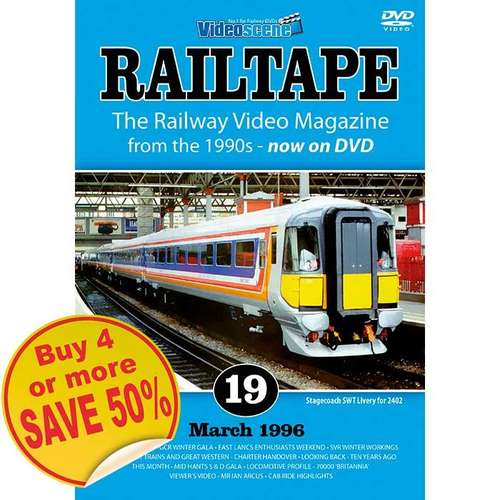 MAIN LINE STEAM: We open this edition with No. 7802 'Bradley Manor', preparing for mainline duties at Worcester Shrub Hill. The occasion was the 'Teign Valley Wanderer', a steam hauled run to Newton Abbot. This was the first special organised by Past Time Railtours.

GCR WINTER GALA: The weather was making its presence felt in Leicestershire, as a snow covered Great Central Railway turned out five engines for duties. Fowler 4F no. 44422, West Country Pacific 'Boscastle' and N2 No. 69523 were joined by NRM flagship engines 46229 'Duchess of Hamilton' and 30777 'Sir Lamiel' for a truly wintry gala.

EAST LANCS ENTHUSIASTS WEEKEND: Snow also covered the hills of East Lancashire as the railway hosted a busy enthusiasts weekend. Double headers over the line included L & Y Class A paired with David Shepherd's 9F 'Black Prince' and Black 5 No. 5407. Also in action, A4 'Sir Nigel Gresley' and 26.B Railway Company's Black 5 No. 45337.

SVR WINTER WORKINGS: As a result of engineering work, the Severn Valley Railway is restricted to running two separate services between Kidderminster and Arley and from Hampton Loade to Bridgnorth. These scenes bring back memories of the first four years of the SVR when the section from Bridgnorth to Hampton Loade first reopened in May 1970.

SOUTH WEST TRAINS AND GREAT WESTERN - CHARTER HANDOVER: A new chapter in British railway history occurred in the early hours of Monday 5th February with the formal handover of passenger train operations for SWT and Great Western. The proceedings began with the arrival of a Class 43 HST and after a brief ceremony, Class 442 Wessex Express Unit No. 2402 departed from Waterloo sporting the new Stagecoach company livery.

LOOKING BACK - TEN YEARS AGO THIS MONTH: With such important changes in the history of the railways occurring, we look back ten years and consider the tremendous changes which have taken place over the past decade. Most significantly, the electrification of the East Coast Mainline and East Anglian line, the replacement of Class 104 DMUs by Pacer units and entry into service of the Foster Yeoman Class 59s.

MID HANTS S & D GALA: The Somerset and Dorset, which closed in March 1996, was associated with green coaches, West Country Pacifics, Standard Class 5s and, of course, 9Fs. The arrival of 'Black Prince' for a short stay completed the requirement. For the occasion the 9F was running without nameplates to return the engine to the livery carried when on S & D duties in the 1960s. Also the line’s Standard Class 5 had shed its Merlin image to appear as the popular Bath Road engine No. 73054. To complete the proceedings another of the line’s resident engines, West Country 'Swanage' appeared as the S & D Stalwart, 'Wilton'.

LOCOMOTIVE PROFILE - 70000 'BRITANNIA': This issue’s profile features the popular Standard Class 7.P Pacific 'Britannia' and follows the engine’s mainline progress from the completion of a £150,000 overhaul at Carnforth in 1991 up to the present day. Since returning to the mainline scene 'Britannia' has proved a key member of the main line team and we look forward to bringing you more action from the Pacific in the following months.

VIEWER’S VIDEO - MR IAN ARCUS: This month’s viewer’s video takes us down under and highlights steam and diesel action in Southern Australia between 1991 to 1995. Double headers on the mainline, preserved railways and freight workings are all included.

CAB RIDE HIGHLIGHTS: We end this edition with Cab Ride highlights over the line from Sheffield to Cleethorpes. Recorded on 10th April 1989, the route is almost entirely over Great Central metals and features single, double and quadruple tracks.