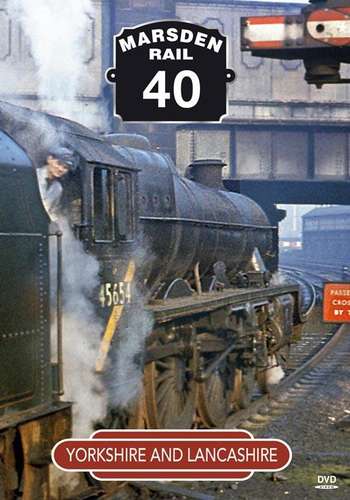 Compiled from film taken in the 1950s and 1960s, this fascinating journey from Yorkshire’s West Riding to the industrial heart of Lancashire features a variety of secondary and main lines, at a time when the steam locomotive was an everyday sight.

The journey starts at Leeds in the mid-1960s, with Jubilees handling many of the services from City Station and film taken at the disused Holbeck Low and High-Level Stations showing a wide variety of locomotives working into Leeds' Central and City Stations.

Leeds is left behind using The Eight O’Clock Special, a film made in 1962 which covers the journey from Leeds Central to Bradford’s Exchange Station in a matter of minutes.

Mill Lane Junction on the climb out of Bradford’s Exchange Station features next, a popular location from which to film the service trains and excursion traffic that operated from this now-closed station.

Eleven miles from Bradford is Mirfield, on the busy four-track Calder Valley Main Line and a short distance west of Mirfield was Heaton Lodge Junction. Here the Leeds ‘New Line’ and the route to Huddersfield left the Calder Valley Route with views in Huddersfield Station followed by film of the Standedge Railway Tunnels.

On crossing the Pennines, the first location is Rochdale, followed by Manchester’s Exchange, Piccadilly and Victoria Stations, plus film taken at Newton Heath Depot which includes LYR Pug 51218, being prepared for a trip on the Manchester Ship Canal rail system. Of a similar vintage to this was former North Staffordshire Railway L-Class locomotive Number 2, filmed working at Walkden Colliery in 1965.

Leaving Manchester, the next location is Wigan Springs Branch Junction, followed by scenes around Bolton which include film of the infamous Chequerbent incline. Next is Preston, with views of the city’s MPD, station and nearby Lostock Hall Depot, which together with Burnley’s Rose Grove Depot were amongst the last operational British Railways’ main line locomotive depots. Fascinating film captures the essence of a locomotive depot in the steam era.

Lostock Hall and Rose Grove Depots supplied locomotives for the numerous enthusiasts’ specials that ran in the final months of the UKs mainland steam operations and several of these are featured at a variety of locations. The end came on the 11th August 1968 with the Fifteen Guinea Special, a working which marked the end of British Railways' main line steam operations and film of the special arriving at Carlisle and returning south over the Settle and Carlisle route brings the programme to a close.