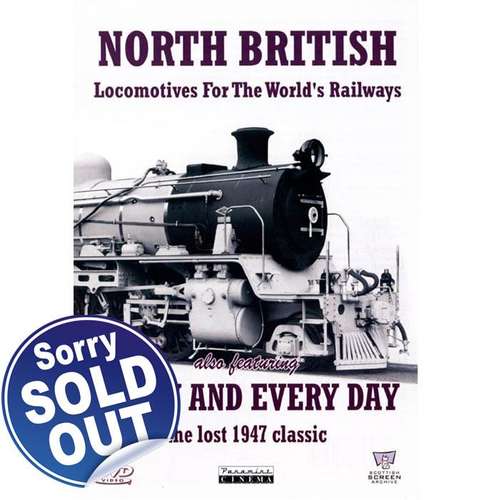 SORRY, THIS TITLE IS SOLD OUT

Today And Every Day

A celebration of British Railway Engineering. Long sought after by film collectors and railway enthusiasts and now available for the first time on DVD, transferred from probably the only print now in existence.

Made in 1947 with the co-operation of the railway companies, it traces the history of Britain's railways, including re-enactments of the North Star's triumphant arrival at Paddington Station in 1838, and the conversion of broad gauge to standard gauge which was completed in 1892.

We then turn to a survey of operations on the contemporary railway system, taking a trip to Dover on the Blue Arrow Pullman to see the Train Ferries and the unique sea locks in action.

Following an exciting footplate ride on 'Windsor Castle', hauling 'The Cheltenham Flyer', the film then considers the role which the railway plays as a "common carrier" for all sorts of goods, without which "there would be no chance for a profit".

Perhaps the most fascinating section is an inside look at locomotive construction at Swindon 'A' Shed where a GWR King Class engine is being completed.

The film concludes with a look at the first intercity diesel-electric LMS 10000, and surmises that thanks to British enterprise, we can be sure that "our trains will run today and every day."

The North British Locomotive Company, formed in 1903 by the amalgamation of Sharp Stewart & Co, Dübs & Co and Neilson Reid & Co, was once one of the three largest manufacturers of railway locomotives in the world.

This 1949 film offers a rare look behind the scenes at Springburn, Glasgow, to see the processes involved in designing and manufacturing steam locomotives.

During the film the 2000th locomotive produced for South African Railways, 'Bartholomew Diaz', is seen being completed, and it is a tribute to the quality of Glaswegian workmanship that it is still in service today in South Africa, more than half a century later.

The detailed processes and departments shown include:

Locomotives for the Second Front

A short wartime newsreel showing the production of War Department Austerity engines at Springburn in 1943.

1954, black and white. Made by Paramount News for the Ministry of Supply.