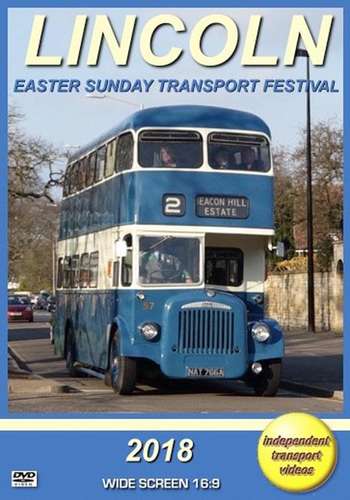 It is often said, “variety is the spice of life”. If you want “variety and spice” in your bus world then a visit to the Easter 2018 gathering at the Lincolnshire Road Transport Museum open day will see your wish granted!  The independent transport videos cameras paid a visit to record the day’s bus and coach action for you to enjoy. This excellent event is all about variety, and this is reflected in the vehicles operating in service that were built between 1927 and 2000! There are also a vast variety of operators featured including Lincoln, Derby, Grimsby-Cleethorpes, Northampton, Hull and Doncaster Corporations, Lincolnshire RCC, Southdown, London Transport, Tyne & Wear PTE as well as a number of independent operators. This will make for a very interesting day. Our filming takes place along Whisby Road, North Hykeham adjacent to the Museum, Doddington Road and St Mary’s Street in the city centre close to the site of the new Bus Station. With the variety of buses and coaches to travel on, it is possible to see how much bus travel has changed over the past 90+ years and our cameras capture some of this action. Our first ride puts you alongside the driver in the cab of a Daimler CVG6/30 with Roe bodywork that was formerly Grimsby-Cleethorpes 57 (NAT 766A -TJV 100). We travel on this superb bus to the city centre and back to the museum, taking in all the sounds and atmosphere that a bus driver in the 1960s would hear everyday. Our second ride to the city centre is as a passenger onboard a Willowbrook bodied dual-purpose single-deck AEC Regal III, built in 1949 and originally operated by Enterprise of Scunthorpe. At the city centre we return to Doddington Road on board a Volvo B7TL with Alexander ALX400 bodywork operated by Marshalls of Sutton-on-Trent.

Numbered DD99 (T3 YRR) in their smart fleet, this bus began it’s operating life with Dublin Bus. Our third ride is a real treat! We join the driver in the cab of Lincoln Corporation number 5 (VL 1263), a 1929 Leyland Lion LT1 with a very rare body built by a local company, Applewhites. We take a short ride on this lovely bus, which has a petrol engine. Continuing our “variety” theme for you we then travel on former Derby Corporation 111 (CRC 911), a 1952 Crossley DD42/8A double-decker with a Brush body for our journey to the city centre. Northampton Corporation 129 (VV 8934) provides our ride back to Doddington Road. This Daimler CWD6 carries a Duple utility H56R body and dates from 1945 and is restored to a very high standard. With plenty of action filmed on Whisby Road, our final scenes of the day are on Northgate with a lovely backdrop of Lincoln Cathedral and at the special ‘Park & Ride’ site at Teal Park. The end of a truly remarkable day – full of variety!

To complete our programme we catch up on the contemporary bus scene at the new Bus Station in the city centre close to the Railway Station. The main operator in Lincoln is Stagecoach. Here we see a number of new Enviro200 MMC single-deckers in service alongside a new Enviro400 MMC double-decker in the two-tone purple livery branded ‘Interconnect’. Other vehicles include mostly Scania and ADL Enviro200 and 400 buses in standard livery, as well as a Scania E400 in a dedicated Park & Ride livery.