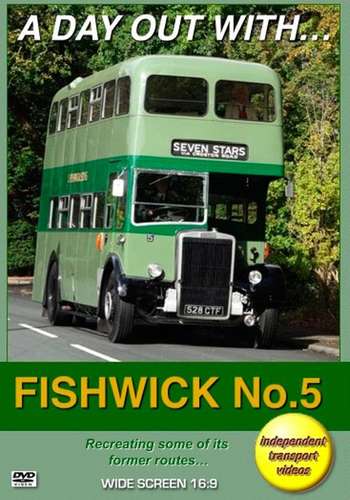 John Fishwick & Sons (J F & S) was a much-admired bus and coach operator based in Leyland, Lancashire. Founded in 1907 when John Fishwick left the Lancashire Steam Motor Company (which was soon to change its name to Leyland Motors) to start his own haulage business. By 1911 a bus service was operated to the nearby village of Eccleston on Saturdays only.This proved to be popular with lorries being used for both general haulage and passenger carriage work. By 1919, J F & S’s first purpose built bus had been acquired, a Leyland S5 or “N” type single-decker with a Leyland body. The bus side of the business continued to expand using vehicles of that make, unsurprisingly, given its proximity to Leyland Motors.The haulage side of the business ended in 1951 but growth of the passenger carrying side continued with the acquisition of J.

Singleton, a Leyland based coach operator, which led to further expansion of this operation. In 1966 came the acquisition of W. H. Fowler, a local body-builder, some of whose bus bodies supplied to Fishwicks were, to say the least, somewhat idiosyncratic in appearance. In 1987, post deregulation, a mini-bus fleet consisting initially of four vehicles was established operating under the “FishKwick” banner.By mid-1997 after 90 years, the fleet had grown to 45 vehicles mainly Leyland Nationals, Lynxes and Atlanteans but also Dennis Darts, Bristol VRTs and Mercedes-Benz mini-buses, with the coach fleet comprising EOS 90s, Volvo B10Ms and DAF SB3000s all to a high quality specification.

The business continued to operate a core network of bus services radiating from Leyland to Preston and Chorley as well as College contracts. The vehicles were exceptionally well maintained and always immaculately presented in the same two-tone green livery as originally stipulated by John Fishwick.

The centenary was marked in 2007 by the application of a special emblem, which was affixed, to the nearside window of each service bus and the business appeared to prosper with the regular intake of new vehicles. It therefore came as something of a shock when its closure was announced and a swift end to 108 years of service in the area came on the 24th October 2015.

Happily for what proved to be a valedictory occasion in September 2015, the cameras of independent transport videos were in Leyland. Using preserved ex Fishwick, 1958 Leyland PD2/40 with low-bridge Weymann bodywork, formerly fleet number 5, many of the routes were re-enacted. With modern vehicles of the fleet also making an appearance coupled with shots of the depot, this DVD is a lasting testament to a much-missed operator.John M Edwards November 2015