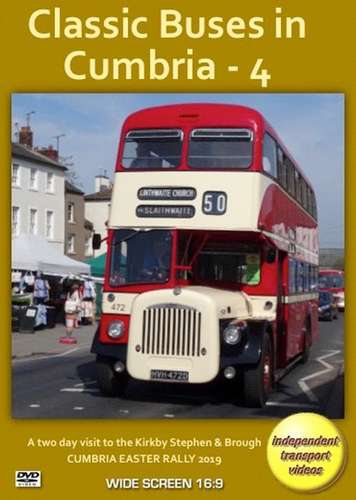 The independent transport videos cameras returned to Kirkby Stephen in April 2019 to record the excellent rally and running day for you to enjoy. Since our last visit the event has been renamed the “Kirkby Stephen & Brough Cumbria Easter Rally” and is now ‘under new management’! The event was just as good as ever and coupled with excellent warm and sunny weather, it was a joy to attend and bring you this DVD programme.

We filmed the event from early Saturday, 20th April, until the close of events, late afternoon on Sunday the 21st. Our cameras will take you around the area, filming at the best locations and also ride on a number of the classic buses attending the rally. This event brings the past to life as the buses and coaches run through the pretty towns of Kirkby Stephen and Brough. There is a vast array of vehicle types including the Leyland Titan, Atlantean, Tiger, Tiger Cub, Leopard and National. From the AEC stable there is the AEC Regal, Routemaster, Reliance and Swift. Bristol was represented by the Lodekka, RESL, RELH, LH and VRT, not to mention other types in the shape of the Guy Arab, Daimler, Optare, Volvo and Bedford - the list goes on! Bus fleets represented include Barrow, Blackburn, Blackpool and Huddersfield Corporations, Cleveland Transit, Crosville, Northumbria, Ribble, West Yorkshire, Busways, Merseyside PTE and London Transport. Scottish fleets are represented with vehicles from Strathtay, Western and Midland Scottish, Clydeside, and Lowland Omnibuses. Also featured are a good number of independents. Our filming locations in Brough include the main Rally site, New Road and Main Street.

In Kirkby Stephen we film along North Road, Market Street, Victoria Square and outside both the West and East railway stations. On Saturday we ventured into the East Station to see the departure of steam engine Lytham St. Anne’s – a Peckett & Sons Works No.2111, No.1, 0-4-0ST, built in 1949.  Our cameras also ride on a number of vehicles that link these locations. On Saturday we ride on Western SMT Leyland Leopard L2466 (SCS 335M), Huddersfield Corporation Daimler CVG6LX/30 472 (HVH 472D), and Blackpool Corporation Leyland Titan PD3A/1 512 (HFR 512E). On Sunday we had the pleasure of travelling on two Ribble Leyland Atlanteans, the first 1481 (TRN 481V), an AN68A/1R with ECW bodywork and the second, 1686 (NRN 586), a PDR1/1 with Metro-Cammell bodywork. Our other two rides were on Bristol VRT/SL3/6LXBs, both with completely different bodies! The first a standard ECW example, Lowland Omnibuses 856 (NDL 656R), the second with a unique to Cleveland Transit low-height Northern Counties body. At the car park of the local Kirkby Stephen Co-op we see a display of four Ribble vehicles reminding us that 2019 marks the 100th anniversary of that well-loved bus fleet. We hope you have enjoyed your trip around the superb Cumbrian countryside featuring these lovely classic buses and coaches.