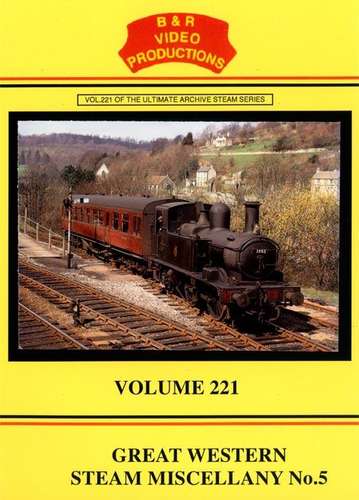 The fifth volume in our miscellany series to cover the former Great Western empire and beyond, Once again it is compiled from mostly previously unseen footage including some rare scenes.

We begin at Oxford before moving to Basingstoke, followed by a treat for branch line enthusiasts – a journey in July 1961 in the brake van on the daily freight train from Kidderminster to Bewdley, Cleobury Mortimer, Tenbury Wells, and Woofferton Junction. Next to Bristol for scenes at St Anne’s Park, Dr Day’s Junction, Temple Meads, Kingswood Junction, the Docks, Narroways Hill Junction, Ashley Hill, Stapleton Road, Pilning, and Filton Junction.

The area around Gloucester is well covered including the 14xx-hauled push-pull services together with Lydney, Bullo Pill, Grange Court and Sharpness. Then to Banbury with ‘Halls’ on the through service between York and Bournemouth (the last regular express work for the GW 4-6-0s) and 0-6-2Ts going about their business.Another treat for GW fans is a footplate trip on the ‘Cathedrals Express’ from Worcester to Paddington in the summer of 1963 behind the now preserved 7027 “Thornbury Castle”. This includes double-heading up Chipping Campden Bank with a 0-6-0 ’2251′ coupled inside and seeing the water gauge rise when passing over Charlbury Troughs.

Worcester is another location with plenty of footage including the ‘Vinegar Branch (featuring a 16xx fitted with an unusually shaped spark-arresting chimney), the famous bridge over the Worcester & Birmingham Canal, Shrub Hill station and it’s environs, Norton Junction and Worcester’s first station at Spetchley (closed in 1855!).

There is also coverage at Didcot, the Lickey Bank, Barnstaple Junction, Wellington Shed plus a journey along the line to Stafford. Also to Much Wenlock via Ketley, Horsehay & Dawley, Lightmoor Hall and Buildwas on the last day of the passenger service in 1962.

The archive film is mostly in colour An authentic sound track has been added along with a commentary to complement this further nostalgic look at the last years of Great Western steam.