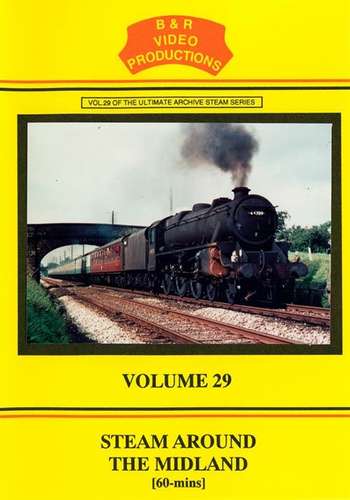 Film from Brian Lockey of Luton who recorded so many of the events around the Midland Main Line from 1958 onwards.

The accent was on Luton Midland and Bute Street, from Napsbury to Sharnbrook before steam finished on this busy route into the capital.

Early railtours over closed branches and secondary lines are included, with sometimes quite unusual motive power, such as both tours with J52 No. 1247 in the early sixties to Hertford and over the Hatfield to Luton line.

A journey around Midland and London and North-Western lines centred on Luton is the main theme of this DVD.

Included are all the usual LMS types associated with the area such as Jubilee, Royal Scot, 4F, 2P, Fowler and Stanier tanks, 9F, Black 5, Super D, 8F and Standards, Northampton-Olney-Bedford locals, Wellingborough and excursion traffic at Luton (just look at those headboards).

The Hemel Hempstead and Higham Ferrers branches preclude a visit to Derby Works.

The "Farewell to Midland" steam tour of June 1968 with "Oliver Cromwell" to Manchester brings to an end another fascinating insight into a long vanished scene.