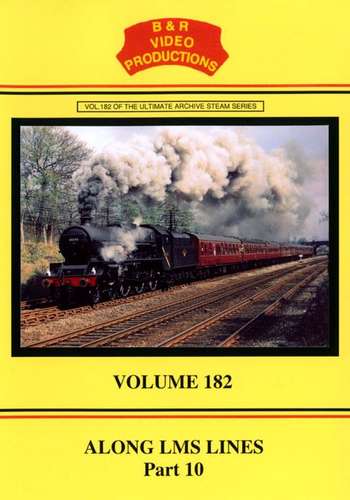 We start in 1968 near Todmorden with a Black 5 double headed train passing through, followed by a 1967 visit to Leeds for the last Jubilees. Here we see 45593 'Kolhapur' on a Thames-Clyde Express relief, with footplate scenes of the engine being fired. Then to Stockport to see Royal Scot 46115 'Scots Guardsman' on a service train, the Midland at Mansfield for a 4F leading a Brush Type 4 on a goods train and Market Bosworth with a Standard 2-6-0.

After a brief glimpse of Gloucester Eastgate, we visit the 1 in 37 Lickey Incline area between Bromsgrove, Blackwell and Barnt Green for a variety of banking activities between 1962 and 1967 using combinations of 3F Jinties, ex-GWR pannier 0-6-0Ts, 9Fs and Type 3 diesels. There is even a train being banked by two panniers and a Type 3 diesel! Plus trains hauled by ex-LNER and ex-SR interlopers and a DMU cab ride from Kings Norton to Bromsgrove.

At Bushby shed and Bescot, the last ex-LNWR Super Ds 0-8-0s are in action around the shed and on railtours including at Birmingham New Street. We even see a Peckett shunting at Walsall Gas Works exchange sidings. More railtour views at New Street in steam days contrast with a rail blue era glimpse of a rebuilt New Street with class 86 and 87s.

In London we visit a newly rebuilt Euston station for a 1960s electric arrival. But in earlier times we see a Black 5 on station pilot duties, visit Camden and Willesden sheds and see Royal Scots on the ex-GC main line. We return to the WCML at Roade in Northamptonshire for scenes of various trains passing by followed by a visit to Nuneaton for a Crab on a PW train and Super Ds on freight. Other workings are seen before visiting Tamworth for trains hauled by steam and EE Type 4s.

Crewe is a hive of steam activity with Duchesses, including 46256 'Sir William A Stanier FRS', Patriots, Jubilees, Britannias and 3F station pilots. A brief glimpse of the future with AL5s passing by! We visit Crewe South Shed for scenes of both steam and diesel motive power.

We travel northwards along the WCML with 8Fs, Black 5s, Jubilees and others to Warrington and its shed including 45221 being coaled. Then to Winwick and along the 4 track main line to Wigan followed by a visit to Walkden Colliery for Austerity 0-6-0T and ex-NSR 0-6-2Ts on coal trains.

We close with views of passing steam trains on the Midland main line at Belper, shed scenes at Bolton, and finally Jubilee 45658 'Keyes' departing Sheffield Midland.