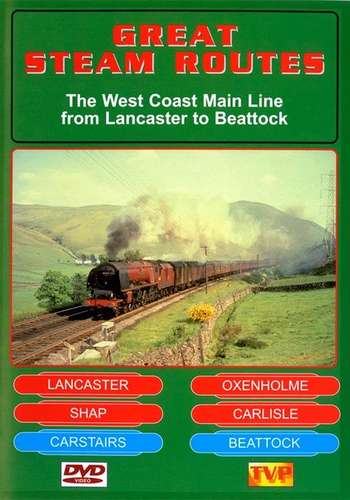 The West Coast Main Line from Lancaster to Carstairs was one of the great stamping grounds for steam in the 1960s.

Enthusiasts flocked to the formidable climb to Shap, and the lesser visited, but no less spectacular ascent to Ais Gill.

Then there was Carlisle with its busy station, and sheds at Kingmoor and Upperby.

Finally there was Carnforth and the Southern approach from Lancaster which retained steam until August 1968.

This programme explores steam workings over this line during the period 1961 to 1968.

In addition we include a brake van ride from Tebay to Carlisle, as well as a journey from Carlisle to Carstairs.

The programme also includes lineside views on the climb to Shap and Beattock Summits as well as past and present scenes.