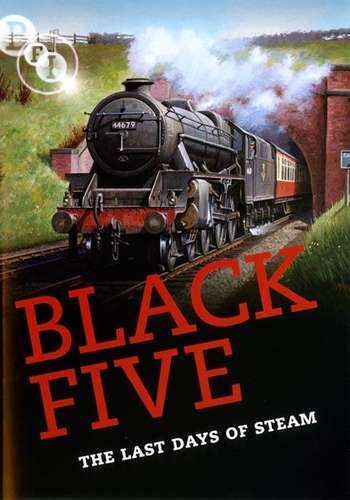 Three films by Paul Barnes that celebrate and regret the final days of steam on the railways - preserved by the BFI National Archive and newly re-mastered for DVD release to mark the 40th anniversary of the end of steam in Britain.

In 1968, enginemen saw the last months of steam haulage on Britain's mainline railways, and faced a great change on their lives.

Black Five captures on film the last days of steam power in the North West of England around Carnforth in Lancashire, a location which had been the setting for the archetypal railway romance, David Lean's Brief Encounter (1945) over 20 years earlier.

For those who worked on the Black 5 locomotive - the most common of the remaining steam traction in that area - the inevitable progress to diesels and electrics prompted mixed feelings.

Black Five records their reminiscences of the heady, but often gruelling, days of steam, of the craftsmanship and camaraderie, and of the 'personality' of these great machines: there was just 'something about them'.

The workers' comments are an elegy to a time gone by, to skills no longer needed, and they make a poignant background to the beautifully filmed images of the heavy iron beasts trundling their way to the end of the line.

Black Five is accompanied here by two more films, which, with celebration and regret, consider the final days of steam on the railways.

The painter David Shepherd's race against time to record on canvas the magic and romance of steam during the locomotives' last weeks in South London's Nine Elms sheds.

The history of the celebrated locomotive, the King George V, which was taken out of service in 1965, but offered a length of siding at Bulmers of Hereford to continue running, in steam.