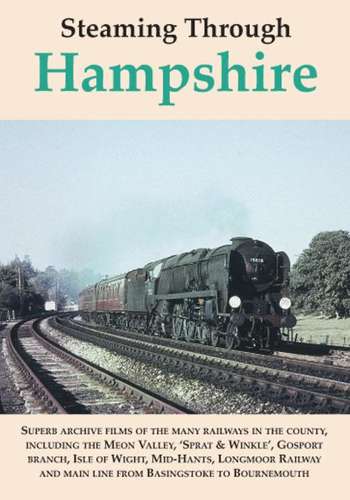 Superb archive films of the many railways in the county of Hampshire, including the Meon Valley, ‘Sprat & Winkle’ Branch lines, Southampton Docks, Isle of Wight, Mid-Hants, Longmoor Railway and the Main Line from Basingstoke to Bournemouth through the New Forest.

Memories of steam operation in Hampshire, at Southampton, Basingstoke, Eastleigh, Winchester, Lymington, the Isle of Wight, Longmoor and many of the branch lines.

This is a selection of superb archive film taken from the early 1960s to the final days of steam in 1967. This dvd is compiled mostly from the films of Barry J. Eagles, who lives in Hampshire and who is a well-known figure in railway and shipping circles.

His wonderful coverage of steam in Hampshire includes the main line to Bournemouth plus the many branch lines, to Fawley, Lymington, the Isle of Wight, Hayling Island, Marchwood Military Port, Longmoor and the ‘Sprat & Winkle’ line to Andover.

Other rare footage in this film includes scenes on the Mid-Hants Railway and the Meon Valley line in the 1950s.