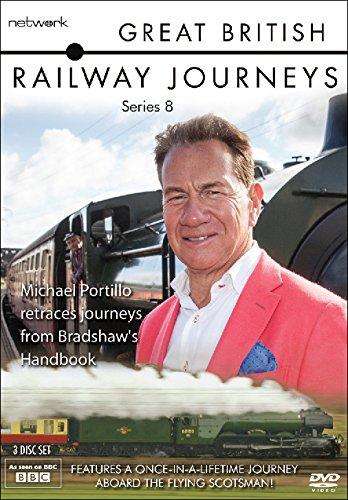 Armed with his Victorian copy of Bradshaw's Railway Handbook, Michael Portillo takes to the tracks as, over a series of three journeys, he travels from coast to coast to discover what remains of Bradshaw's Britain and Ireland.

• London to Edinburgh
• Blackpool to Harwich
• Goes to Ireland: Wexford to Westport

Passionate about trains, Michael Portillo continues to chart the great British romance with the railways in this phenomenally successful series. Armed with his copy of George Bradshaw's famous railway handbook, he retraces three journeys that were first documented in the Victorian guide, witnessing what's changed and discovering how our love of the railways began. Throughout, he makes stops at some of Britain and Ireland's most beautiful cities and secluded villages, meeting extraordinary people and hearing how their lives have been shaped by the railways.

This complete eighth series sees Michael going back to school, testing a state-of-the-art passenger train, uncovering the macabre history of body snatching, rubbing shoulders with Nobel prize-winning scientists and making a once-in-a-lifetime journey aboard the most famous train in history the Flying Scotsman!.