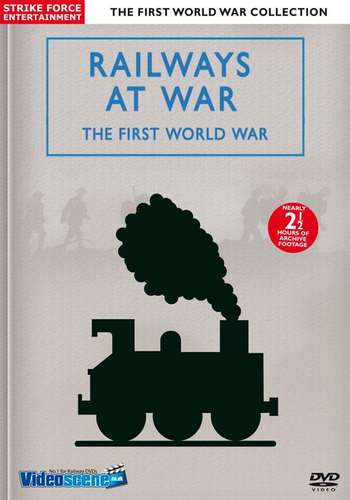 This is the original release from 2010, available again exclusively from Videoscene.

For the first time ever, a comprehensive presentation of nearly 2½ hours of archive film footage evidencing the central role played by the railways in meeting the logistical challenges of supplying the battlefronts of the First World War with the requisite troops, munitions, machinery and stores.

Celebrated military historian Major Tonie Holt provides a commentary throughout on sequences of railway footage from the Somme, Mesopotamia, the Palestinian Front and Siberia.

In many ways tactical success in the First World War depended on the defence of the railheads and the narrow gauge railway supply routes, from them to the battlefronts.

The railhead was where the warehouses, loco maintenance depots and signal and control centres were based; they were also often the point of interchange between the standard gauge national system and the light and narrow gauge railways that led to the battlefield. Railways were the supply line of choice and we see the rapid construction, maintenance and running of the lines by the American Transportation Corps, the American Engineering Corps, the Railway Operating Division of the Royal Engineers, the Indian Sappers, the Australian Engineers and the Canadian Engineers.

We see the speed of the construction of railway lines by the prefabricated 'Decauville' track system and the huge variety of locomotive power brought to bear, not only steam, but early diesel, petrol and petrol-electric motive power.

There are views of the enormous BEF locomotive works at St. Etienne-du-Rouvry and a fascinating sequence on the preparation and firing of British and American railway artillery armoured trains witnessed by Roosevelt himself. The assembly of locomotives, flat wagons and rolling stock at St. Nazaire.

By the armistice, railways were often the only functioning entity in areas of widespread devastation, for example at Aix-Noulette, Ypres and Verdun. We also see the mass exodus, by steam locomotion, of troops from the battlefields at the end of the war back to the French ports and early scenes of the Dunkirk 'roll-on, roll-off' train ferry. 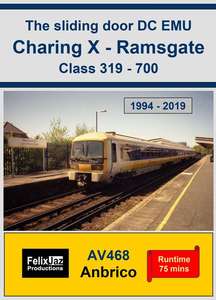