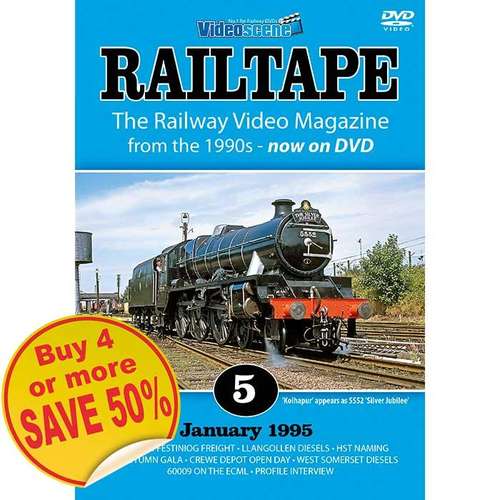 JANUARY FFESTINIOG FREIGHT: The Ffestiniog Railway ran its first revenue freight train out of Blaneau Ffestiniog onto its own main line for the first time in nearly half a century. The principal form of motive power employed for the bulk of the run was that which was first employed on the FR when it opened in 1836 - namely gravity.

LLANGOLLEN DIESELS: The attractive scenery of the Vale of Llangollen gave visitors the chance to see both the line's resident Class 25's as well as their collection of DMU's in action. However, highlight of the weekend was the re-creation of the pioneer number 5000. This memory of the First Class 24 had been recreated by the renumbering 24081- the last Class 24 to see operational service with BR.

HST NAMING: The horse in the Lloyds Bank commercials made an appearance at Bristol Temple Meads when HST power car No.43034 was named 'The Black Horse'.

GCR AUTUMN GALA: Continuing its Silver Jubilee Year celebrations in style, the emergence of 'Sir Nigel Gresley' in British Railway's Express Passenger Blue and numbered 60007, proved the highlight of the two day event. Joining the A4 was Bulleid West Country Light Pacific 'Hartland', the Birmingham railway Museum's Castle Class 'Defiant', as well as 'Kolhapur' its last appearance under the guise of 5552 'Silver Jubilee'.

CREWE DEPOT OPEN DAY: The recently renamed Crewe International Electric Maintenance depot held its open day on the 15th October, when around 12,000 people visited the depot. The organisers assembled over 40 old and new diesel and electric locomotives, including a number of new Class 92's destined for international operation.

WEST SOMERSET DIESELS: This Autumn Diesel Gala included an impressive display of hydraulic traction with two Hymeks, two Westerns and a Warship in action on the longest of Britain's preserved lines.

60009 ON THE ECML: The historic return of steam to King's Cross commenced on the 27th October at Worcester Shrub Hill and 60009's positioning run to Ealing at the head of 'The Capital Streak'. Two days later 'The Union of South Africa' returned to King's Cross to haul 'The Elizabethan'.

PROFlLE INTERVIEW: As a bonus this month we interview Julian Peters, who talks about his father lvo Peters and his latest release in the Ivo Peter's collection - No.11.