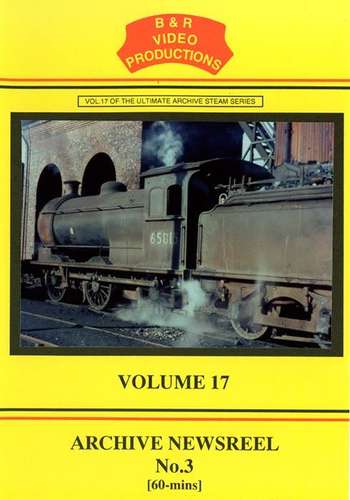 This volume sets out to cover all the 'Big Four' companies so there is something to please everyone.

With full electrification on the Southern main line to Weymouth now operating we return to Dorchester to witness the operation of steam trains reversing up workings at the ex-LSWR terminus.

We profile 6000 'King George V' in its preservation life from 1970 to 1987 covering its travels to Paddington, Didcot, Swindon, Gloucester and the North-to-West route to Chester.

The trip for Swindon Borough in 1974 with unique smokebox side-plates is featured.

Hard workings steam in the North-East of England in 1966/67 where ex-NER type Q6 and J27 locomotives worked to the last around the collieries of Tyne and Wear.

The last Tyne Dock to Consett working with 92063 is seen complete with headboard.

K1, WD 2-8-0, Q6 and J27 workings at Pelaw, Ryehope and Seaton Bank make this selection relive the days of steam as they really were.

So popular was this section of the video with our customers that Volume 18 was devoted to this area for even more power to the pit.

Steam returned to the North Wales coast in the late 1980s but we visit it in 1966 with an LCGB railtour along the coast and up the Conway Valley to Blaeneau Ffestiniog and Denbigh with Britannia,Crab and ex-LMS 2-6-4Ts.

Soak up the steam atmosphere with LNWR signalling at Chester.

We still had 3 minutes left to give a full hour so we inserted the industrial scene at Maerdy Colliery in 1970 when ex-GWR pannier tank 9792 breathed its last in the summer sunshine. To say it was in full steam would be an understatement!