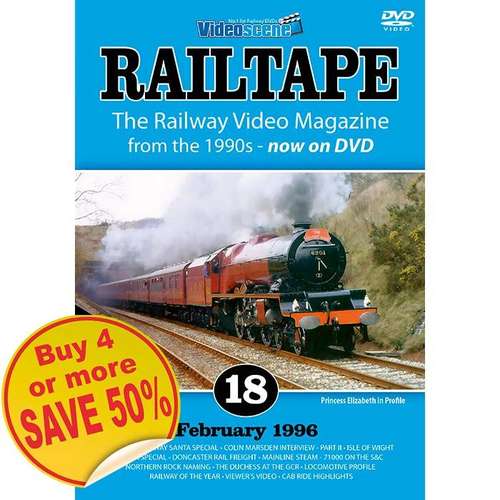 TANFIELD RAILWAY SANTA SPECIAL: The sight and sound of crisp exhaust steam cutting the cold morning air at Marley Hill opens this edition. The Santa Special worked over the section of the Tanfield's line between Andrews House and East Tanfield, with the North Pole Special top and tailed with the ex-Port of Tyne Authority 0-4-0 Diesel No. 35 and the Hawthorn-Leslie 0-4-0 saddle tank No. 2.

COLIN MARSDEN INTERVIEW - PART II: From industrial heritage in the north east we return to one of the acknowledged experts on the current railway scene, and the second part of our interview with Railway Magazine's modern traction editor Colin Marsden, with advice on how to get the best possible photographic results and some top tips for the railway photographer.

ISLE OF WIGHT SANTA SPECIAL: For the second of our Santa Special features we visit Haven Street, the headquarters of the Isle of Wight Steam Railway and the sole surviving Class 02 ‘Calbourne’ in service over the five miles of Island line.

MAINLINE STEAM - 71000 ON THE S&C: The bleak Pennine mountains witnessed a rousing performance from ‘The Duke of Gloucester’ as the three-cylinder Pacific replaced 'Union of South Africa' on two separate S&C runs over the Christmas period. The 23rd of December saw 'The Duke' on the Crewe to Carlisle leg of the tour and, for the mirror working four days later, Class 46 ‘Ixion’ was in charge of the West Coast Mainline leg before the Pacific took charge for the run back to Crewe.

NORTHERN ROCK NAMING: The naming of 91010, sponsored by the Northern Rock Building Society, saw the Class 91 sporting the new style front grille at Newcastle on the 8th December. After the ceremony the 91 departed for the journey back to London, unusually, it took the line which runs out past Gateshead Depot.

THE DUCHESS AT THE GCR: Arriving in time to star in the GCR's Christmas Gala, the National Railway Museum's Flagship, ‘The Duchess of Hamilton’ was joined by another NRM celebrity ‘Sir Lamiel’ and the line’s resident engines, ‘Kolhapur’ and 8F 48305 for a feast of steam entertainment. The ‘Duchess’ is due to stay on the line until late January, and we returned to witness the engine on timetabled duties over the first weekend of the new year.

LOCOMOTIVE PROFILE: This issue’s locomotive profile concentrates on the second of the Princess Royal Class now in preservation – ‘Princess Elizabeth’. Withdrawn in 1962 as No. 46201, the Pacific was bought by the 6201 Society from British Railways in 1963. ‘Lizzie’ has been a consistent mainline performer ever since and this profile highlights the engine’s activities since 1987.

RAILWAY OF THE YEAR: The Isle of Wight Railway has just received the prestigious Independent Railway of the Year award for 1995, and the operation of ex-Island locomotives, coaches and even wagons help recreate the image of the Isle of Wight railways in their heyday. We returned to the line and spoke to Jim Loe, Commercial Director of the railway, who tells some of the reasons behind the line’s success.

VIEWER’S VIDEO: This month the viewer’s video section comprises two separate contributions. The first comes from Mr Tom Johnson and the 'Duchy Explorer' of the 14th October 1995. Next we return to the Severn Valley with a contribution from Mr Geoff Sanders and the annual Autumn Gala of the 23/24 September.

CAB RIDE HIGHLIGHTS: Concluding the action from Railtape 17 with the remaining miles over the mainline from Edinburgh back to Glasgow (Queen Street).