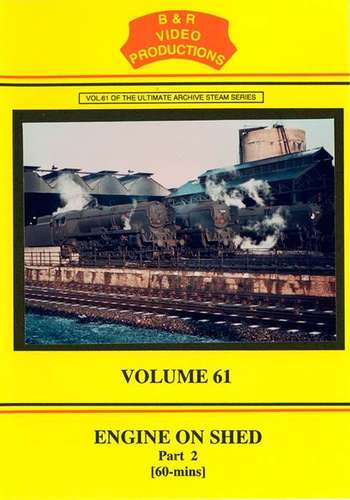 Part 2 begins with the work of shed pilot engines before assessing the needs of engine repairs at Works or in the sheds, boiler washouts, re-metalling axle boxes and other jobs for the fitters.

The work of the breakdown trains were also the responsibility of the fitters; we visit loco derailments and see a WD 2-8-0 in steam and tenderless.

The various types of turntables used for steam engines are now virtually extinct.

Finally, the preparation of engines for the road from fire lighting to eventual ringing off the shed is seen in detail.

An engine's last run in steam and a driver's last turn of duty on the footplate, are all carefully filmed and recorded by an army of enthusiasts to portray what really went on behind the scenes by those privileged to see it.

A lasting memory to the footplatemen and fitters who had to do it.