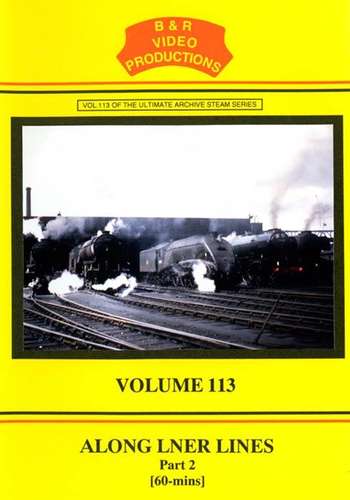 Archive film of steam along the East Coast Route from Kings Cross to York before it ended south of Peterborough in 1963.

There are detailed views of Kings Cross terminus, Peterborough and Doncaster with visits to Top Shed and Grantham.

Motive power shows A1, A2, A3 and A4 Pacifics with B1 and V2 classes putting in appearances.

The Eastern suburban services up to 1962 were worked by L1 and N7 classes and scenes from Liverpool Street to Bethnal Green, Chingford, Hertford East and Bishops Stortford are seen.

The LTS line via Dagenham to Shoeburyness is covered with LMS 2-6-4 tanks.

Spalding is seen as a diversion off the East Coast line before the North Eastern Region is reached.

That is covered by a journey over the Stainmore line on its last day of service in early 1962 and in 1967 with a K1 hauled special to Bishop Auckland.

Rare footage of the Flying Scotsman train in the 1930's is included and the Grimsby & Immingham line before it succumbed to closure.

Mostly filmed in colour from 1959 to 1967 but some black and white footage is included.

A detailed commentary and authentic sound-track completes a nostalgic look at LNER steam.