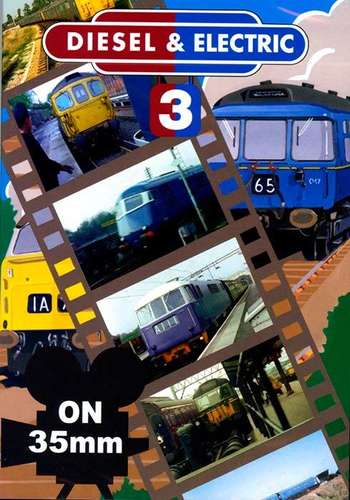 Divided into four main categories, these hitherto unseen sequences show all kinds of nostalgic action from the late 1950s all the way through to the early 1970s.

Diesel: A classic mix of first generation diesel locomotives in both green and blue liveries filmed in a wide variety of locations throughout Britain. Gems include Green 47s, Peaks, Warships, Deltics, DMUs etc.

Electric: Electric Multiple Units in early and late liveries from various BR regions, along with blue AC locomotives on the WCML. Gems include green Nelson EMUs and Hastings DEMUs (included in this section along with EMUs in the same location).

Underground:
For tube lovers there are shots of red 1920's 'standard' stock on the Central line as well as blue examples on the Isle of Wight. Red 1938 stock, silver and red District line stock are further gems!

Driving cab sequences:
Film shot from the drivers' cabs, showing various lines in the good old days of semaphore signals, goods yards and sidings and even sets of water troughs! Half a dozen sequences show parts of the GCR line, including High Wycombe as well as entering the stations at Thame and Southampton Central.

All sixty minutes of footage included within this DVD were filmed on 35mm cinema-standard film in glorious colour. Not only will you SEE the trains but you will HEAR them too - especiallly as you can turn the commentary off if you like. (menu option).