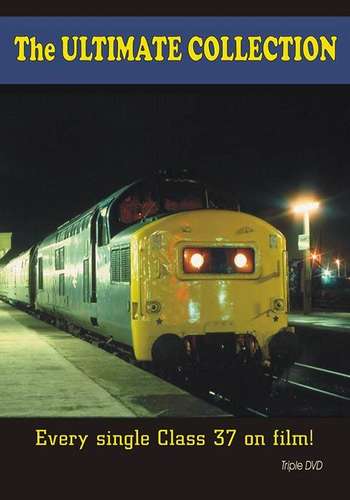 This programme is a TRIPLE DVD set featuring EVERY SINGLE ONE of the English Electric Class 37s on film.

Whichever is your favourite, it will be here. In fact there are nearly 400 appearances of 37s because of double and triple headers - represented by over 30 varieties of livery.

No locos are featured in preservation and all are filmed in the UK. Indeed, almost all of the clips have never previously been seen so this is a feast of rare, and of course noisy, scenes.

Locomotives are shown in sequence with a brief fact screen introducing each of the 309 members of the 37 fleet, which is then depicted by a scene from its past.

This may be last year or many years ago, and thus many liveries are depicted from British Railways Green and BR Blue through to sector liveries and beyond into the Privatised era.

With a total running time of 4 hours 35 minutes and priced at £29.95, this represents outstanding value at just £10 per DVD. Just think - for less than the price of a full tank of petrol you can own ALL of the Class 37s!