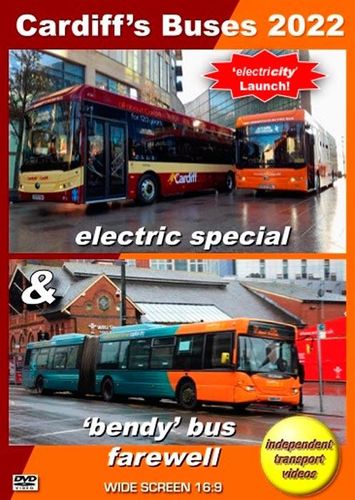 On Friday 14th January 2022 Cardiffbus launched a fleet of 36 Yutong E12 38-seat single-decker electric buses. Painted in smart route-branded liveries – red and green for route 27, red and deep purple for routes 44/45 and orange and light purple for routes 49/50. Others are painted in Cardiffbus’ latest two-tone orange livery or in an orange and black livery and fleet number 436 (CE71 YXV) is painted in a version of the traditional Cardiff Corporation maroon and cream colours suitably lettered up showing the history of Cardiff public transport in this year, 2022, their 120th year of serving Cardiff. Some of the buses had already entered service during December 2021.

We start this special DVD programme with the arrival of this impressive fleet of electric buses as they enter the UK from China where they are built and assembled. Arriving in the UK by sea they make their way to the importer and distributor, Pelican Bus & Coach, a subsidiary of Pelican Engineering Co. Ltd, at their premises in Castleford, West Yorkshire. Our northern camera team were out filming the buses, with the assistance of Pelican, as they are moved around their yard and taken out on test. We see them gradually receiving their Cardiffbus branding and see batches of them leaving very early in the morning for their journey to Cardiff.

In the second part of this DVD we see the launch of these electric buses in the city centre. Our cameras then go out and about to film the electric buses that entered service at the end of 2021 and indeed the rest of the fleet in action. Look out for the ‘bendy’ buses, which were only two weeks away from being withdrawn from service. Our filming locations are Westgate Street where the new electric buses run alongside the ‘bendy’ buses, Park Street, Wood Street and St Mary Street.

The third part of our programme was filmed on Saturday 29th January 2022, the final day of operation of the Cardiffbus ‘bendy’ buses. The ‘bendy’ bus fleet entered service in 2006. Made up of nineteen Scania OmniCity CN94 UA with Scania AN53D bodywork, they were operated on the busy ‘Bay6’ service to the redeveloped Cardiff Bay area of the city, but finished their days on the busy 17/18 routes to the suburb of Ely. The independent transport videos cameras were out capturing their last day in service, which was also augmented with double-deckers that will now take on their role. We take a ride to Ely and back to the city onboard 614 (CN06 GFK), with our cameraman in the rear portion of the bus to see the action and to hear the sounds of these massive buses, which were really quite suited for this route. Filming takes place around the city centre capturing the ‘bendy’ buses and of course the latest electric buses in service as well as buses from Stagecoach and Adventure Travel. Locations include Westgate Street, Park Street, Scott Road, Wood Street, St Mary Street, Duke Street and out of the city on Newport Road, where we see one of the new Yutong E12 electric buses from Newport Bus on their long established service 30 that is jointly operated with Cardiffbus. Our final images are of Cardiffbus 614 about to leave on the final ‘bendy’ bus journey from the city centre and then of it coming off the wash at the depot ending one era, just as a new era starts with the electric buses! 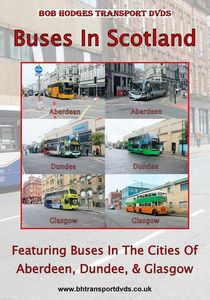